How To Win Amstel Gold

Share All sharing options for: How To Win Amstel Gold 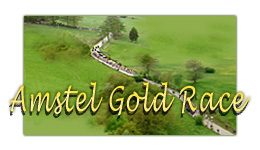 Of the 31 climbs the riders will face, which one is ripe for the decisive attack?

This is a typical way in which we (OK, I) try to conceive of race strategy beforehand, knowing full well that things happening in real-time don't tend to follow scripts. But in races like Paris-Roubaix, the Tour of Flanders, or Milano-Sanremo the scripts have fairly loud cues in a few places, so even predictable moves still happen... and work.

I don't see the Amstel Gold Race in such terms. Of the 31 climbs (over 27 actual distinct geographical features), no single one stands out, besides of course the sprint up the Cauberg to the finish line. Rather, the story of the race is the cumulative effect of climbing twice as many hills as the Tour of Flanders in roughly the same distance. Moreover, there are five pretty hard ones in the last 25km, including the closing km. So it's clusters of climbs, rather than any one slope. Except of course the final sprint. IMHO there are a couple of clusters that start putting on the hurt: the dip into Germany around the halfway point, with three climbs in 6km. Another key cluster starts shortly after with the lyrically-named Gulperberg (this is a race about beer, no?) kicking off five climbs in 15km and eight in about 32km. One climb every 4km. At pace. And 4km is the distance between summits, so the flat part is presumably a fraction of that.

But the decisive selections take place over the last 25km of the race, on the following:

The Kruisberg (km 236): Not to be confused with the one in Flanders. This one is supposedly 1.4km covering a rise of 230 meters, which makes for an average grade of about 16%. My info on some of these climbs is a tad sketchy, since they don't all make climbbybike.com's list.

The Eyserbosweg (km 238): A beast, as it's roughly 1km averaging 7.3% with a nasty 21% grade in the middle. It's also known for the rather odd-looking radio antenna/observation tower on the summit.

The Fromberg (km 241): Dearth of information, though Pez called it the mildest of the concluding climbs. Still, everything hurts at this point.

The Keutenberg (km 246): The worst, with a 22% stretch at the bottom and a total of 1.2 miserable km to the summit. Supposedly only averages 5.6%, though I find that hard to believe.

The race almost certainly won't split up for good until somewhere in here. Last year the key split was on the Eyserbosweg, with a nine-man sprint up the Cauberg. In 2007, Stef Schumacher and his magic blood values bounded away from the contenders in a classic Lefevre-style one-two (where the heads of state are boxing in your teammate, in this case Rebellin), shortly before the Cauberg. In 2006, it was Frank Schleck soloing away on the Keutenberg, seizing a lull in an otherwise very active race. The year before was the dreaded the fog race, where Danilo DiLuca won a 30-man gallop on the Cauberg. In 2004 Rebellin and Boogerd escaped from a six-man group on the Fromberg. In 2003, it was Vino from 5km out, after DiLuca shattered the pack on the Eyserbosweg. From this evidence you could say the Kruisberg is too far out to matter, but since it's so close to the others let's just call it part of the finale.

Map on the flip. Tomorrow: individual predictions! And haikus!