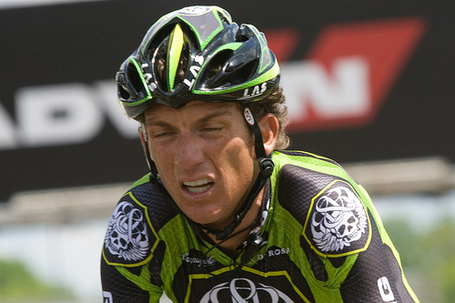 US Road Champion Tyler Hamilton has tested positive for a banned steroid during an out-of-competition exam. Facing expulsion for a second offense, Hamilton will admit to doping, retire from cycling, and focus on his struggle with depression. In his CN interview Hamilton cops to a somewhat isolated incident where he recently took antidepressants which contained banned steroids. As these substances are the source of the positive test, this would not call into question his national road title.

Hamilton's announcement, coming in an 11am EDT press teleconference hosted by his Rock Racing team, ends one of the most wrenching sagas in US Cycling history. Hamilton elevated himself from a Lance Lieutenant to a grand tour captain and occasional, improbable hero. In both the 2002 Giro d'Italia and 2003 Tour de France he soldiered on after breaking bones in crashes. In the former, he became a legend for finishing second overall after breaking his shoulder, grinding down several teeth in the process. In the latter, Hamilton overcame the disappointment of an early crash at the Tour to again endure the unthinkable, even winning a stage. This same season saw wins at Liege-Bastogne-Liege (the only American Monument victory) and the prestigious Tour de Romandie. This success and the extreme suffering he endured contrasted his polite, genteel public face and made Hamilton one of the most prominent cyclists in US history.

So when it all came crashing down after a string of suspicious blood values eventually yielded a confirmed positive test, followed by an embarrassing trial, the fall was dizzying. Hamilton became a pariah, his trial a low point for the sport, and his eventual return was met with resistance, particularly when his name came up in the Operacion Puerto files. Now, at the bitter end of it all, comes word that Hamilton suffers from depression, which is either a consequence of his chemical abuse or an explanation for it.

The field of psychology has introduced ambiguity into the concept of personal responsibility over the last 100 years. A lot of mental illness that used to go undiagnosed we now understand, and a lot of people we might have called "deviants" are now seen (often rightly, I think) as helpless victims. Hamilton apparently suffers from a fairly significant, lifelong case of depression, which was diagnosed in the middle of the peak years of his career, which is also when his past doping offenses took place. Depression isn't black-and-white, and I have nothing insightful to add here, but it's safe to say that his condition and his more serious doping matter are likely not unrelated.

I will also note that Hamilton's transgressions arose in one of the sport's more difficult periods for riders. The climate of cycling at present is officially intolerant of doping, and with a real enforcement regime taking place riders have a reason to stay clean (along with the knowledge that it's on them if they don't). Prior to the Festina scandal in 1998, it's fair to say that the entire sport was so thoroughly complicit in doping that no rider could possibly be held responsible. But between Festina and Operacion Puerto -- encompassing all of Hamilton's productive years --the sport was outwardly proclaiming a new dawn, while quietly permitting business as usual. For a rider, you were told that you could be caught, and if it happened you'd be hung out to dry, but at the same time so little effort went in to stopping cheating that the clean riders didn't stand much of a chance. Only the strongest characters waded through cleanly, maybe successfully.

Hamilton was obviously not one of the stronger ones. He cheated, he committed crimes against the sport he loved and we still love. He did it for money and fame, and possibly to 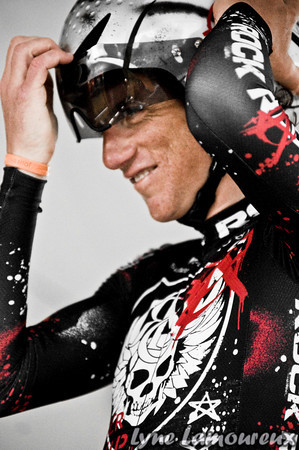 appease some demons. He took foolish risks, continuing to dope even after the testers made it clear they were on to him. And it destroyed him in the process.

I suspect he is unwell, because if he were well he probably would not have made such foolish, horrible choices. To still be doping, even as one of the most suspect, most-watched riders on the planet, is just... obtuse. But I won't forget that 2002 Giro. Doping made him faster, but the suffering still seems real. I won't forget Hamilton's Massachusetts roots, for personal reasons. If this doesn't sound too strange, I am glad he is out of the sport, and I will be rooting hard for him to find a happier life.

[One aside: we made a little "news" when an earlier, unsourced version of this story was making the rumor rounds, and wound up being attributed to the Podium Cafe. The fact that the story wound up being true doesn't change the fact that the prior rumor was unsourced and not really a story. And if we weren't wrong about the underlying item, well, I'd prefer we were.]