Meanwhile in an alternate universe...

Please! I beg for your indulgence for just a few minutes. Over the past couple of days I've rewritten this post maybe 15 times- and those are just the rewrites that actually made it to my computer.  I go to work and as I'm needling people I'm thinking of stage three of Pais Vasco. At night I try to watch some World Cup Qualifying matches and my mind is on Big Mig. (Easy to do when watching the US team. Oi. But I digress.)  It's not that the three races I plan to preview aren't interesting. But every time I log on to Podium Cafe it's staring me in the face:

Not that that's a bad thing.

I keep wondering why do these three lovely, exciting races that are GP Miguel Indurain, Vuelta Ciclista al Pais Vasco, and Klasika Primavera so exactly overlap Flanders, Gent-Wevelgem, and Paris-Roubaix? I mean can you possibly plan a worse time for these races other than perhaps the third week of the Tour de France? (And by that comment I am only looking at the popularity of the Tour.) I mean who's responsible and did god hit them with the stupid stick at the crucial time? It's not like the Basque organizers didn't know what they were doing, right?

To which the other part of my brain, says, "No, they didn't realize what they were getting into when they firstrenamed Big Mig only eleven years ago. They didn't fully appreciate how popular these races would become. You dummy." And that's true. These races are an integral part of the Basque community.

None of these three races have the history of the Northern Cobbled Classics. Klasika Primavera (Spring Classic in English) began in 1946. GP Miguel Indurain started in 1951 and first named after Indurain in 1998. Pais Vasco started earlier- 1924- but was not held between 35 and 69. So there's no question that it's the Basque races that are infringing on the Cobbles' calendar.

For most of their existence it's also been very little of a problem. For one, the Cobbles and these Basque races attract different sorts of riders; it would be a huge problem if the Basque races overlapped with the Ardennes trio since you can look on the Basque races as prequels. (Dare I say that Amstel, La Fleche, and Liege-Bastogne-Liege are Episodes 4, 5, and 6? Yes but only because you guys don't know my exact address!!  Ha Ha Ha!)

Another reason why the overlap with the Cobbled Classics has been no problem is that for most of their existence, the Basque races were just a few more regional Spanish races, popular in Spain but of lesser importance to the cycling world at large. Who really cared who won Pais Vasco or if it was even staged?

Ah, but Evolution is a funny mistress. She takes what is unimportant and makes it a Strength. She takes what is Strong and renders it Extinct. Even on a human timescale, what we take as given, disappears before our very eyes. In the tumultuous world of Pro Cycling we are witnessing smaller old races or brand new races becoming increasingly important on the calendar. Think TDU or California. Think Basque Week. Then we have formerly major races becoming less important or possibly going extinct. Catalunya, Ouest France-Plouay, etc. I can't imagine the truly major races, the Monuments or the Northern Classics, going away, but I think one could bet the house that the Pro racing calendar in 2050 will look quite a bit different than it does today. How different, I haven't the faintest, but without a doubt different.

There. Thank you. Every year for the past several I've had this, "Why Are All These Races Happening At The Same Time???" Freak Out. I'm a little better now. To the races!

But when did these Basque races start becoming higher profile? I say it was when this race rebranded itself eleven years ago. In these eleven years it has quickly gained popularity among the Ardennes set since now the Basque Week stages two single day Classic races that are sisters of the Ardennes trio. Just look at the profile:

Typical Ardennes nastiness there. What's more is that like the Belgian Classics, the course keeps bending around on itself so fans can scoot from one part of the course to the another: 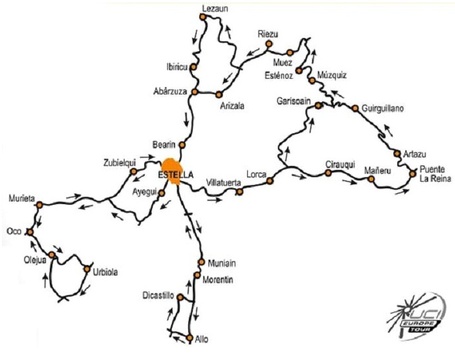 Very cool. Designed for the fanatic in all of us. And, no, those arrows don't make sense to me either.

So who's racing and who might win? For the past two years, this has been designated an HC race- 10 Pro Tour teams, and 6 Pro Conti and Continental teams. Fabian Wegman is the defending champ, and he won it three years ago too. . Rinaldo Nocentini won it two years ago. Both are racing. Do I favor them? Hell no. In other years, yes, but this year Alejandro Valverde is racing and if you don't think Valverde is gonna work out some anger in this race then you don't know from humans. There's some other big names that will take supporting roles in the Al Delivers A Can Of Whoop Ass: Sammy Sanchez, Nibali, all the Schleck brothers among others.

Speaking of the Schlecks, it's interesting to look at the different lineups for these three races. Remember, Big Mig is this Saturday, Pais Vasco the following Monday-Saturday, and Klasika Primavera the following Sunday (Paris-Roubaix day).  KP is also an HC race but Pais Vasco is a PT event with only one two non Pro Tour teams invited (Cervelo and Contentpolis-Ampo) so it's interesting- and complicated to see how the Pro Tour teams are dealing with these three races. I can't describe the different lineup approaches here; go to Cycling Fever to get your lineup fixes.

Although there are two one day Classics here the race that gets the most attention is the stage race, Pais Vasco.  In my twisted mind this is THE Best and Most Important Week Long Stage Race of the Season because of where it sits on the calendar. So cool then that it fits so um Snuggie bewteen Flanders and Paris-Roubaix. Think about it:  every major weekly stage race is some sort of prep for some other bigger race and/or they are so early in the season that riders are just getting in form. Pais Vasco is different. The riders are in form and the races that immediately follow it, the Ardennes races, are spaced far enough apart that the Pais Vasco riders don't have to save energy. Plus the Giro is far enough in the future that the Pais Vasco riders can recuperate.

Each week-long stage race puts it's big stages in different order and Pais Vasco is no exception. Remember Paris-Nice? Opening time trial, a few flat stages, the big climby stage then two hilly stages? Pais Vasco is sort of the opposite: Three climby stages to start with the third being the Queen stage and a hilltop finish but no big Ventoux-like mountain, a fourth transitional stage- hilly at first but with a long flat part at the end, a smaller hilly stage, and ending with a 24 km time trial with a decent 200+ meters in 4 km hill in the middle. So, again, lots of short steep climbs all through this course. Stages much like the P-N stage where Contador lost his yellow jersey.

Not a race for sprinters though there are a precious few. The biggest sprinter name, easily, is Oscar Freire, rejoining the peloton after his injury. After that its slim pickings: other sprinters who can climb a bit: Alan Davis, Gianni Meersman, Enrico Gasparotto (why here and not the cobbles?) and Xavier Florencio. Even Columbia is bringing no sprinters. So who is here, you ask? Just the riders who dominate the rest of the cycling world after the cobbles run out:

- Cervelo, Sastre and Gerrans: their Grand Tour A team.

- Saxo counters with most of their A team: The Schlecks, Larsson, both Sorensens, Kolobnev.

- FdJ has Casar and DeGregorio

Okay. My apologies in listing the riders but this is good! No more practice races. Yum!

One more thing. Look at the Fan Posts to see that Universalsports is showing this Live and Free starting at 10 am, Eastern. Let's pray for a good picture. 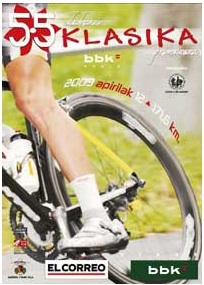 This, the most anonymous of the three Basque races because it's running while Paris-Roubaix is underway, can provide the most dramatic finishes. Last year Cunego out-dueled Valverde at the line with Carlstrom and Astarloza also recording the same time with 13 other riders 12 seconds back. The course is flat, flat flat for the first 100 km then hilly hilly hilly for the remaining 71 km. The finish though is downhill.  I won't paste the course profile; instead go here for the profile and the finishing kilometer. I have no idea if we'll ever see video of this race.

So there. Thanks for indulging me in my annual freak out. At least you didn;t have to read about gavia surfing mountains or how Jesus rode a mountain bike up the hill to deliver the Sermon on the Mount.  We'll be posting live race threads and other preview stuff as the races get closer. Watch the races and you'll be the better for it. Oh- and if you have time, spare a few minutes for those other races in northwestern Europe too. You know: Rund um Köln and Scheldeprijs. ;)