Chris wrote something yesterday that just rang true that I think needs repeating:

On that last point, this is a big development. Alberto Contador will be the overwhelming favorite, but the only way to make it interesting would be to drum up another young, powerful rider with most or all of the same qualities, AND have him ride for a team that is deep in talent, aggressive, experienced, and knows specifically how to win a Tour. Up till now it was maybe looking like the usual suspects (ranging from utterly suspect to something more, like Sastre) banging their heads against the Astana juggernaut. Problem solved, today. I wouldn't make Andy the favorite, but I do like how the next five or so Tours are shaping up.

Today Cosmo went even further with this:

All Saxo Bank, all the time. I really would have liked to have seen some more fight out of the other teams today, but I suppose I can take heart in the fact that there's a cyclist who can win classics and grand tours again. Hooray!

I too feel the excitement of this amazingly talented  kid achieving his first breakthrough win.  At the same time part of me was wondering, is he really that good? Can we now expect him to win the Tour sometime in the next several years? Maybe this year?  How normal is that, winning a Grand Tour and a Monument in the same year or even a Monument and a Grand Tour in a career? Such things can be researched....

Below is a list of all riders who won a Monument and a Grand Tour in their careers, with  the specific races specified, from most recent to Coppi and Bartali, post WWII time:

- Only two riders have won what A Schleck will attempt this year: victories at both LBL and the Tour in a single year. Hinault and Merckx. Those two also did the double in a single year: 1980 (obviously) for Hinault, and 1969, 71-72 for Merckx. So... do you think Andy Schleck will join such company this year? Neither do I.  It would be fun to be proven wrong but... I'm not seeing it.

- Only one other rider (besides the Cannibal and Badger) has won any Monument and any Grand Tour in a single year: Killer in 07 with his LBL/Giro double. We'll get to him later.

But go further into these stats:

- Since Hinault did the double in 1980 no one has paired up any Monument with the Tour, even in different years. What was at one time uncommon but do-able for the best riders has for the last 29 years not been done. Again, no Monument winner has also won the Tour and vice versa. Not Contador (obviously).  Not Lance, Not Indurain, Lemond, Fignon, Kelly, Anquetil, Motta, Gimondi, Bobet, or Leman. Not even Pereiro! (rimshot).

So what's the Tour's problem-because as we see above it's the Tour that's the problem and not LBL or Lombardia, as they do some overlapping lately with the Vuelta and Giro. IMO the answer just goes back to the idea that the Tour de France is so extreme in what it requires to win. You need to be a certain type of rider and if you are not that type exactly, the most you can hope for is second but you probably won't get close to the podium. All-rounders? Yeah, right. It might seem to our eyes that the riders who win LBL should be able to win the Tour because they used to back in the day. LBL winners are good climbers. They are tough all round riders. Champions. But they aren't Tour champions. Somehow they just don't have that consistency over three weeks in both the TT's and the mountaintop finishes. We have said that here at Podium Cafe the last couple of years about Valverde. But it's not just Valverde; it's all LBL winners these decades. It's Bartoli and Kelly too. And you have to include baby Schleck.

Look at this from the other side. The Tour tends to have repeat winners. You get Merckx, Hinault, Lance, Indurain, Anquetil, Lemond, Fignon, Thevenet, and Bobet. Together these nine riders won 37 Tours in 52 years. The Tour loves a champ. And don't we all think Contador's gonna win several more Tours? I will go so far as to say that while it seems like some Tours are closely contested, if a prior winner is racing, bet the house on that guy.

At present, there isn't room in the Tour for actual racing between riders like there used to be decades ago because the riders and teams have learned how to game the system. Have you read old stories of rider x winning a stage by 10 minutes, only to see his rival, rider z, return the favor the next day? Just doesn't happen any more. Why? Because once the Tour's course became basically the same every year (some flat stages to open up, a TT, one set of mountains, a couple flat stages, the other mountains, a couple flat stages , a deciding TT, then the Champs d 'Elysses) the riders inevitably adapted and slowly they type of riding that would win the race became a formula. Contador has the formula down; so did Lemond. And here's the kicker: once you attune your body to winning the Tour you've practically eliminated yourself from winning any one day race. Again, see what Valverde is doing this year. He's literally doing a makeover so that he no longer has those inevitable bad days that take him out of the race.

So the Tour these days is actually hyper-specialized. Many types of riders may race it but only what 2-4 riders can actually  win it. These days each major race selects it's winners from a certain range of body types. It's laughable to think of Alberto Contador winning Paris-Roubaix, or Tom Boonen winning the Tour. Or it would be laughable if the joke hadn't long been played out.

I've been a real killjoy here. Is there any hope for baby Schleck?  Can the essence of what the Tour has become be changed? Yes.

All of what I've said above is a lead up to this sentence: THE most exciting race this year has been Stage 7 of Paris-Nice. The Bert Bonk race. Why? The short answer is because Christian Prudhomme loved it. He talks about making the Tour more interesting. He along with all of us are right now staring down the barrel of Alberto Contador beating Lance's record number of Tour wins, baby Schleck or no, and he is looking into making the race more wide open. Fortunately for him he has Paris-Nice to tinker with besides the Tour. So this year he did a mountain top finish on stage 6 followed by this LBL-like stage 7 (see the profile on the side). 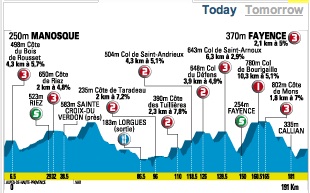 By doing that he surprised Bert and Astana making for not only a wide open stage but also a more fun final stage where Bert attacked, hard. It was compelling stuff because it was so unexpected. Look back at the race threads if you want: we tifosi were going bonkers in a way we  haven't in any other race-not Flanders or P-R or MSR or LBL any other race, as fun as they were.

So I see Prudhomme doing more of that stage 6-7 combo from P-N in the Tour itself.  When he does it'll be the first step towards making  the race accessible to another group of riders: the hilly Classic specialists. To me this is the first step to making these Grand Tours more interesting. It would give the Andy Schleck's a chance just like it gave Lulu Sanchez (and Frank Schleck and Sylvain Chavanel) a chance last March. They need to give more types of riders a chance at winning. To do that the decisive stages must at times favor different types of riders. You got a problem with 50 km of Paris-Roubaix in the Tour? Why not give Stijn Devolder a real chance at winning the Tour? Why not do the same for Fabian Cancellara? Why must the decisive stages always be either a TT or a mountain top finish? Why have the same sequence of stages every year?

I think in ten years we'll be seeing very different Tours than we are seeing now.  And Andy Schleck will win a Tour de France. Just not this year.