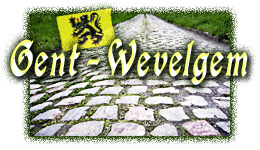 It is tempting to see Gent-Wevelgem, the mid-week Cobbled Classic slated for Wednesday, in binary terms: either the sprinters hold it together and do their thing, or not, whereupon about anything can happen. I know this because I personally feel this temptation, for the simple reason that after apportioning the rightful amount of brain space to De Ronde and Paris-Roubaix, I simply don't have much candlepower left for G-W. But nobody makes a living looking at the Classics in the simplest possible terms, so let's get real.

The real story of the parcours has three chapters:

Rolling out of Gent, the peloton has traditionally headed all the way to the North Sea, where for much of the first half of the race the riders deal with the winds. More than any other classic, the winds have frequently told the story of the race, if only because the hills and cobbles aren't quite as selective as the other two races this week. Anyway, by going all the way to the coast, riders encounter the most exposed terrain in Flanders, and if you have ever seen pictures of 180 guys in an array of echelons along the water, it was probably taken in this race.

Unfortunately (for us, not them), this year's edition and the last few don't literally go right up to the water. The closest they get is Koksijde, maybe a kilometer inland, and they don't follow the coast for more than 5km before turning away. Past editions have literally hugged the shore route for, what, 10km or more? That's some exposure, and as recently as 2005 the attendant winds wreacked havoc, causing crashes and splits early on that never healed. But if the route isn't the story, the weather may be. Forecast (Koksijde) for Wednesday:

Before we continue, your course map: 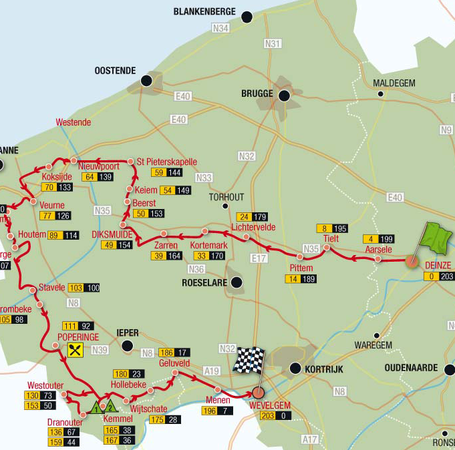 The apple of every G-W fans' eye is the circuit at the southern end of the map, the two laps over the Monteberg and Kemmelberg. The former is the appetizer, a 1km stretch that peaks out at about 11%. Five kilometers later it's onto the Kemmelberg, one of the country's most fearsome slopes. There are three approaches: east, west and south. I can't really tell from reading the roadbook or looking at the rather large-scale map above, but I am guessing they ascend the west side, which is where gradients of 26% are said to exist. In any event, once they get done here, the course circles around for a second ascent 23km after the first one. By this time, the one-two punch is enough to kill off plenty of riders' dreams.

As bad as the ascent is, the descent can be especially treacherous. Gone is the strech of cobbles that were deemed too dangerous to descend after a rather gnarly 2007 edition, but in its place is a very steep, narrow little "road" which won't be significantly more fun to go down. I'd like to petition the cycling gods for an answer to this question: have more riders lost this race going up the kemmel, or down it? As the pack gets strung out going up and down, the Kemmel is a fine place to launch an attack. Marcus Burghardt won in 2007 when he and four other escapees hit the jets coming off the Kemmelberg carnage. The year before Thor Hushovd was part of a 32-man escape that formed just after the descent. Similar stories in 2003 and 2002. Message to Cavendish: just getting up the climb is half the battle -- you haven't won until you rejoin the pack coming off the bugger.

Best-case scenario for Columbia is that the pack reassembles immediately after the Kemmel. But even there it's not a simple matter. You've battled winds all day. Crap weather more likely than not. Two circuits of the Monteberg-Kemmelberg torture. 180km so far, most of it all-out. The slightest bad luck means that the "pack" consists of everyone who hasn't crashed or been caught out in the wind; rarely will that include anything resembling your whole team. Last year the sprint consisted of a robust 78 riders, but the next largest assembly since 2000 was the 32-rider gallop of 2006. Single-digit finales are common, even when the sprinters have things in hand, simply because the last 38km are fast, exhausting, and rife with opportunities for the real flahutes to escape.

Probably the most interesting finale was in 2002, when no less than Mario Cipollini, spurred on by the desire to show he wasn't a mere pack-sprinter, bridged a 10" gap alone to a small group of stunned onlookers, whom he dusted in the home stretch. Another curious finale was 2007, when Oscar Freire survived the carnage to make the finale, only to see both Burghardt and Roger Hammond slip away from the leaders before the home stretch. [Then there was the madness of 2005, when Nico Mattan came up through the team cars to snatch victory from Juan Flecha, though I only mention this edition because how can you not?] Even when there is a larger group, like 2006 (32 guys) and 2004 (19), the pack tends to include mostly flahutes and few if any real sprinters. And even when the real sprinters match up, the usual assumptions about who's fastest don't necessarily apply: in '06 Hushovd beat a still-in-his-prime Alessandro Petacchi.

The pre-race chatter will undoubtedly focus on Cavendish, if only because in a wide-open race with many possible results, a Cavendish victory is the easiest to picture: he makes the finale in a group of a dozen or so riders, and gallops home to victory once again. I give him about a 25 percent chance of victory, not too shabby really. For several reasons: he rode the Kemmel circuit last week and won in de Panne. He made the selection last year, only to sit out a sprint which he called overly dangerous. He won Milano-Sanremo with no experience whatsoever. At this point, I don't doubt his bike handling or his ability to maintain his legs at the end of a hard day. How can you?

But on a stormy day, a zillion things can take the race out of his and Columbia's hands, and between Cavendish and Someone Else, I'd say the latter is a safer bet. More tomorrow on whom exactly that might be.

Coverage Options: Check back with Steephill.TV to see if they put up their customary dashboard. Cycling.TV will have the race live. As will we, natch.