Shorter post: The end of this stage will be wild.

Stage races are odd things. They have these different kinds of subtleties from day to day that one day races can't have, which is both a good and a bad thing depending on your perspective. For instance, take Stijn Devolder. What he's done for two years in a row at the Tour of Flanders- not just win it but how he won it- is lauded here and elsewhere. But in two months time, when he does basically the same thing at the Tour of Switzerland, he'll get ridiculed for it because it just doesn't work in a stage race. That delayed gratification multi-day aspect of stage races can be hard to take.

But I love stage races. All kinds. And that's part of the fun too: Not only do are the courses laid out differently from stage race to stage race, just like one day races, but each stage race has a different idea on how to build the multi-day tension between the days to make the entire race that much more exciting. Take Christian Prudhomme, the Tour and Paris-Nice stage director. he's doing some very interesting experimenting on the multi-day canvas that a stage race is by combining different types of stages in different and new ways. (I think he really loves this aspect of his job.)

Still each stage race has a certain identity to it that only slowly changes over the years. At Pais Vasco, there are a few important aspects that are respected. The first is a recognition that most of the riders are by now in good condition: they can handle more thrown at them then earlier in the year. At the same time, they can't climb the biggest mountains in the Basque territory since snow is still there. Together these things mean many short and steep climbs define this race. But those short but steep climbs are tempered by what is kind of traditional- a last day 20-some km, hilly but technical ITT. So all the earlier days' climbs are thus ridden with that last day's ITT in mind. A final wrinkle that Pais Vasco tends to have is that of the five pre-ITT days, two of them (a different two each time) are Serious Climby days, while the other three are less demanding. What all this means is that by the last day's ITT there are time gaps between the leading contenders for the overall but in theory that could all change on the last day. "In theory" is the important phrase in that last sentence because for those who can read the race (by knowing the climbing and chrono abilities of the main contenders) the more you can see which riders need to perform well on which days or else they're toast.

That's what I hope to do with the rest of this post: forecast what various riders need to do for tomorrow's Serious Queen stage. The course profile below is hard to read but basically after an easy half of the race we then get about 50 km with four climbs: cat 2, cat 1, cat 2, and cat 1, with a short 1 km flat ending. There will be plenty of places to attack tomorrow. 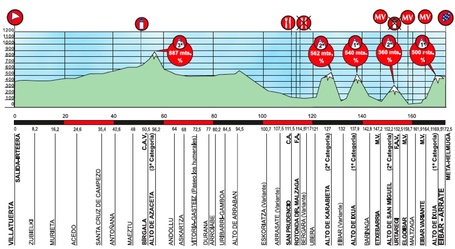 So far we've witnessed the first Serious Climby day (the first stage) and one less serious day (stage two). That first stage served to eliminate some pretenders to the overall title and put others on the ropes. With the Queen stage tomorrow (the other Serious Climby stage) we will know clearly who is eliminated before the last day's ITT and who's still in contention. In other words there are several riders who can ride defensively tomorrow because they can trust their ITT skills, another group that has some confidence in their time trialing but would like to put time into the first group just to be sure, and two last groups that needs to attack, attack, attack tomorrow because their chrono skills are not good. Below are the four groups:

Fair Chrono abilities- should do some attacking to create a time gap over the riders above them here.

Meh Chrono Abilities- need to attack. These guys need a good minute at least over the first group, 30 seconds over the second group above.

Dave Zabriskie* (Z-man is a good time trialist but he's also 42 seconds down which makes him need to attack if he wants to win.)

You can take the list above with its subcategories and say those are the true standings. The race is still Contador's to lose and he needs to just shadow the other guys and then beat them in the time trial. Nearly the same can be said of Lulu, Rogers, and Evans and if the four of them are in a virtual dead heat come Saturday, the race is definitely up for grabs.

In the next group, Cunego is a better chronoman that he's given credit for as long as the course isn't too long and has hills. This course fits that description. All the others are decent chrono men too - just not in the class of the first group (Zabriskie, again is the exception). They just need some time on the first group- a minute would be good.

The Meh group and Poor group have their work cut out for them. Actually, since some of these guys are teammates of guys further up this list, they are domestiques now even if they are at the moment tied for the lead. This last point is important for other riders to realize. For instance Contador, Rogers, Lulu, and  Evans don't have to worry much about Arroyo, Rodriguez, or Lopez attacking him from Caisse d'Epargne cause its Lulu who will threaten him in the TT.

So for tomorrow look for Astana, Columbia, Lotto, and Katusha to play defense- unless their leader decides to go out on their own to kill off the opposition, probably on the last climb. Look for the other teams to attack to different degrees depending on their TT abilities. Cunego may wait to the last climb while Liquigas will try to get Kreuziger or Nibali away earlier. Saxo should attack now. This minute. Today (Tuesday). The wild cards will be Euskatel and Caisse d'Epargne- they will attack but not necessarily with their main guys in hopes they wear out the best chrono guys, then attack on the last climb again. Astana, Columbia, Lotto and Katusha will need to be very aware and use their domestiques to full effect while possibly banding together.

Tomorrow will be a very cerebral day.