Paris-Roubaix: After the Trench

Share All sharing options for: Paris-Roubaix: After the Trench 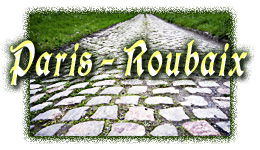 Yesterday we began our Paris-Roubaix strategy chat by discussing the importance of surviving the Arenberg Trench, or at least how little you can expect to accomplish anything if you don't. Today's topic: you've survived that little taste of Hell... now what? Call this post Stage 2 -- ride like hell and hope you don’t die before the velodrome.

This pithy phrasing is courtesy of Koppenberg in yesterday's comments, and it captures the (relative) pure simplicity of this race. I would not discount the effects of team tactics, but in a normal classic race your biggest enemy is wind resistance, and the antidote to wind resistance is helpful teammates, plus a clever strategy. In Paris-Roubaix wind resistance is only part of the problem, and therefore less of a factor.

The other two major factors are the violent shaking of your bike on the cobbles, and the threat of mechanical failure. The latter is all-too-well documented; IMHO the challenge of riding on 19th century road technology is the most interesting factor. Don't quote me on the precise technique (cadence??) but to get over the cobbles your task is to choose a preferable line, get up a head of steam, and stomp it.

Assuming the race is down to 20-30 guys after the Trench, this begins the kind of mano-a-mano power tests we fans live for. This pure, simple battle of wattage-versus-cobbles is what defines the race, raising it above the usual team maneuvers, moreso than places like Flanders where the stones often aren't quite as rough, or where the bergs draw the focus elsewhere. Occasionally a team can group here and work over rivals; more frequently the favorites will have maybe a single teammate to play games with. But often it's simply a matter of the most powerful rider (who, along with his bike, stays intact) hammering out the win.

The visual image for me is how attacks on the cobbles are so subtle, no quick accelerations, just a slow opening of a gap as a pursuer cracks under steady pressure. The strongest survive while the rest slowly melt away. Check out Fabian Cancellara's winning move in 2006: two meters becomes five, then ten, then 20, then we're counting portions of a minute, and so forth. Fabian Cancellara can accelerate, I suppose, but the way he cracked his rivals was less dramatic, but no less decisive.

Last year was kind of a perfect race, in a sense. Tom Boonen, Alessandro Ballan and Fabian Cancellara escaped in the last 30km to fight in the Velodrome for their respective podium steps. You could probably add a name or two to this final selection on pure merit (i.e. if Pippo doesn't flat every 15 seconds in the Trench...) but few fans would be dissatisfied with this selection, no? Over these last 30km each rider took a chance jabbing at the others, but ultimately the three were all equally strong, and equally close to oblivion, so as to mute any real escape chances. Ballan would surge, then realize the others weren't totally cracking and that he might if not careful. Then Cancellara would try, with the same result. Boonen too, though at least he knew he could win on the track. It was like watching the 15th round of a boxing match between two nearly-exhausted champions, trading blows and testing, knowing that there was almost no way to separate themselves. Ultimately someone had to be called the winner, but that part almost seems arbitrary.

Translation: it's impossible to say where the next selection after the Arenberg Trench will occur. The usual suspects are Mons-en-Pévèle and Le Carrefour de l’Arbre, plus a small sprint in the velodrome. With good weather predicted, later selections are likely, though wind direction could make hash of that. All you can really say is that the winner will be one strong, tired dude.

On the flip: some analysis from last year about where the splits tend to happen, course analysis, plus a listing of the cobbles sections.

Oh, and if someone could round up a list of favorites, I'd be much obliged (tonight is Passover, so I'm a bit pressed for time). If you do a poll, please do it in fanposts, since they run long. Thanks!

In 2008, the key split was around Auchy-lez-Orchies, just before the infamous Mons-en-Pévèle section, with further winnowings here and there. Basically from 50-30km out, it was game on; from there it was the three champions alone.

As for the route, it's virtually the same as last year, with the exception of a 1.6km stretch of cobbles 6km after the Trouee d'Arenberg, which was eliminated for some reason. That sounds like a lot, except it was sandwiched between the 2.4km Arenberg hell and 3.7km of three-star cobbles, so I am willing to assume that this omission won't change anything. Paris-Roubaix: at this point, it is what it is. This is good to know, since it wasn't all that long ago that the Trouee had to be skipped because of poor condition. If you haven't heard of the citizen action group responsible for keeping the cobbles in use, go check out Les Amis de Paris-Roubaix. I find it impossible not to like these people.

The Cobbles data: I don't know who the keeper of the cobbles ratings is, but it's not ASO. These are copied from CN:

One last goodie: the first cycling broadcast I ever saw, complete with John Tesh and his synthesizer...