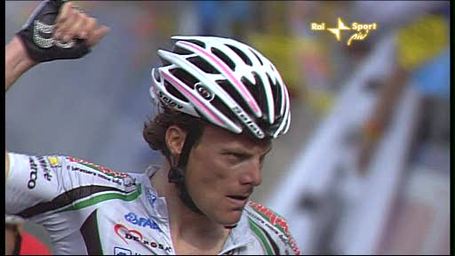 Jens! Voigt was the star of the stage, serving up another of his heroic attacks, but it's a grand tour (meaning, wins don't come cheaply) and the stage was simply 3km too long. I thought Soler's attacks showed how this stage played out: it simply wasn't hard enough to ditch the cream of the Giro crop.

Levi Leipheimer is racing one of the smarter races out there, always near the front of the pack, never getting caught out (even yesterday). As a result he has a handful of seconds on most of the big names, and is within hailing range of the maglia rosa, which is all you can ask for in the early stages.

Lance Armstrong, meanwhile, is demonstrating why riders typically don't prepare for a grand tour by taking three years off and smashing their collarbones six weeks out. I suspect he will be among the leaders in the later stages, but it may take some time for his legs to come around.

Girbecco says: Climbing stage? Can't you tell the hors d'oeuvres from the main course? See you on the Alpe di Suisi Siusi!