Poll: How Do You View The Killer?

Share All sharing options for: Poll: How Do You View The Killer? 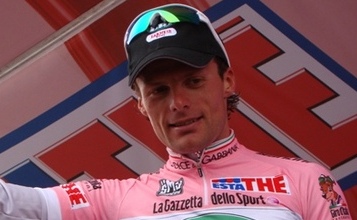 I've been wrestling with how to style a post about the race's most fascinating character, Danilo Di Luca. The present maglia rosa has fought his way back into the conversation this year with another insurgent campaign -- possibly more doomed than 2007, but definitely more credible than his 2008 effort. Il Killer di Spoltore has been animating the Giro for most of the last five years, winning stages with flair, nearly costing Paolo Savoldelli his jersey in 2005 with a powerful escape (and towing Gilberto Simoni along), stealing the title in 2007 with a tremendously clever plan, then falling into disgrace before returning to animate some stages last year.

To me, the only thing separating Di Luca from being my favorite rider on the planet, hands down, is Oil for Drugs. The facts are pretty hard to ignore, and once you see a rider in this light you can never feel at ease with any more positive assessments of his on-bike accomplishments. That said, Di Luca is a special case for me. He is the first rider from the Mezzogiorno, and from Abruzzo, to win the Giro. I don't tend to personalize the North-South divide in Italy too much, but I know what it meant to my ancestors, so Di Luca's roots aren't irrelevant to my thinking. More than that, however, is the flair with which he rides. Di Luca is aggressive and intelligent, intense and regal, and got his nickname by knowing exactly how to finish a race. There are odd images of him: gently but firmly closing the door on Bettini in an uphill sprint; ascending a ramp of the Col du Finistere with his hands off the bars, simultaneously leading a ferocious attack and eating a power bar; winning stages in places like Montevergine with his trademark dash; and engineering a nearly-miraculous stab at glory on Monte Pora last year with two teammates. He's never dull, that's for sure, at least until the press questions start.

So what would you call your overriding impression of the guy? And as I ask this, I have a request. Oil-for-drugs is one of the choices, but I like to refrain from speculating about who's on what right now. People are entitled to their suspicions or lack thereof, and it's not worth debating. Just a request. Here ya go: