Got Your Volta Ciclista a Catalunya Preview Right Here!

Share All sharing options for: Got Your Volta Ciclista a Catalunya Preview Right Here!

What? Another race? This week not only has some pretty dramatic Giro stages but also the Tour of Catalunya which managed to find some money at the last minute to give us a show.

Any video? I think so. On Monday morning, check, Cycling Fans or Steephill.TV or see a link that umwolverine will undoubtedly provide in our race thread. (Note: On Monday we'll have a live race thread on thre front page here but for future stages, due to the Giro runningm we'll move the race thread to the Fan Posts section.) Side note: What? Did they not teach Ohio State students how to use the interwebs? 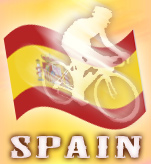 When? Monday (tomorrow)-Sunday: Six stages in all

What's the course like? Interesting, more so than last year IMO.

- First stage is a flat sprinter's course. Flat flat flat.  Not many sprinters (see below) but this is their stage. Bet the house of that other Norwegian; the one we haven't seen lately.

- Second stage is hilly with two cat 1 climbs and a cat 2 ending with oh about an 18 km decent to the finish.

- Third stage has some serious elevation gain on tap, climbing via three cat 1's from seal level up to 1200 m before a less than 10 km decent to the finish. The finish looks like it has a small uphill kick. Samu?

- Fourth stage is the Queen stage, taking us into Andorra. The first half is mostly a slight elevation gain with a cat 1 climb followed buy a decent. Then from a low point of 670 meters, the course goes up all the way to the finish via a cat 1, a cat 2 then anHC finishing climb: the Coll de la Botella at 2030 meters.  Serious stage, this one.

- The fifth, sixth, and seventh stages should all end in bunch sprints or breakaways. All have climbs but won't be decisive to the GC.

Who's participating?  This is a Pro Tour race so all those teams are represented plus Cervelo (natch), Andalucia, and Contentpolis.

Ah but who's gonna win? Oh geez, You had to ask. This is a fiendishly difficult race to suss out. Scan the recent winners:

You get the idea. Near as I can tell there are five different types of riders in this race:

1) Alejandro Valverde. He's a type of rider all his own right now what with the CONI thingy hovering over him. What's his mind like? Is he gonna take his anger out on the field or just go quietly? My guess is the former so if you are a betting person, I'd put money on him.  He's got a good team behind him too, probably the best on paper: Uran, Pereiro, Gutierrez, Losada, Erviti, etc. But then who knows.

2) Riders who have Reputations. If you look closely at those reputations though-climby guys, solid Grand Tour guys-you see a bunch of riders who's career will peak with a top 10 in the Tour or Vuelta, but not a podium spot. A lot of them are here:

Sammy Sanchez, Igor Anton, and Mikel Astarloza for the Euskies. Gadret, Vlad Efimkin, and Dessel for AG2R, Zubeldia and Paulinho for Astana, Kirchen for Columbia, Cobo for Fuji and Casar for Francaise des Jeux, Gomez Marchante for Cervelo, Dekker for Silence!, Sylvain Chavanel for Quickstep (looking to duplicate his Paris-Nice run), and Karpets for Katusha. You know: if they are on big teams they are top domestiques at the Tour, or maybe protected riders at the Vuelta. They don't quite have what it takes to podium due to indifferent TT skills and/or they get dropped on the big climbs right before the final selection but they are Names thatyour remember somehow.. The best of this bunch IMO is Sanchez: he does actually have a podium spot at the Vuelta which he is wise enough to ride again this year instead of the Tour.

4) Sprinters. Yes, there are a couple: we got Thor Hushovd who won the first two stages last year-one of them being a short TT that the race doesn't have this year.  Also we have, hmmm... wait, hold on... Vaitkus, Duque, Eisel and Henderson of Columbia, Chicchi, Ciolek, and we welcome Stuart O'Grady back to the peloton. Probably there are a couple other sprinters from smaller teams that I am unaware of. So, as usual for Spanish stage races, there's not much in the way of top sprinters with Valverde being about as good as any of them.

5) Northern Classics guys back from vacation. As you can see from the start list: Flecha, Langeveld, Van Summeren, Posthuma, Roulston and Florencio, Ladagnous, Moinard, Maaskant, Tossato, and most importantly Niki Terpstra. All will be practicing their domestique/autobus techniques with Van Summeren especially gearing up for his Lanterne Rouge competition. He's good at that.

See the difficult part in picking a winner? You don't know who's here for the miles only and who's really trying to win. Check that: most riders are here for training. Who's not and who's got the climby legs is the question.

So who do I pick if not Valverde? Jacob Fuglsang. Hey! You asked...

This is a Cat 5 VDS race so there are some points in store for a lucky few. The winner will probably earn around a 10th of the points that the Giro winner will take.