Share All sharing options for: Giro d'Italia, On the Scene at Stages 13 and 14 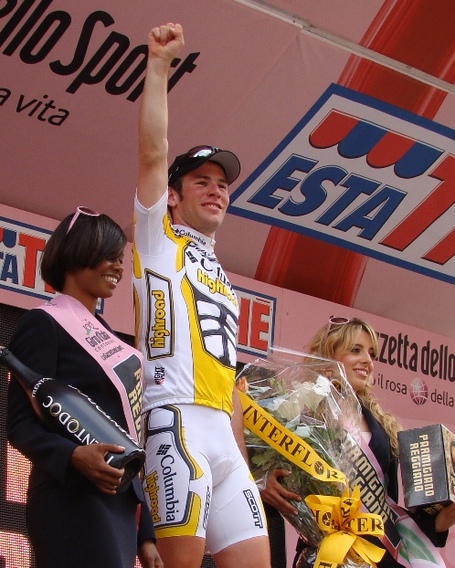 In Firenze, the race security let those of us with press passes remain closer to the finish line than usual, in the area usually reserved for holders of photographer passes.  It was exciting, but because I was up there rather than back with the soigneurs, I didn't get the usual post-stage pictures of the riders.

I did catch Bettini and Ballerini hanging out together as the caravan went by, 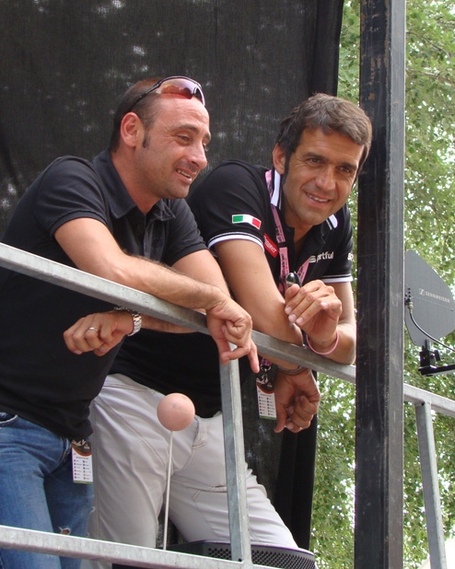 and the stage winner and jersey holders heading back toward the podium for the ceremony. 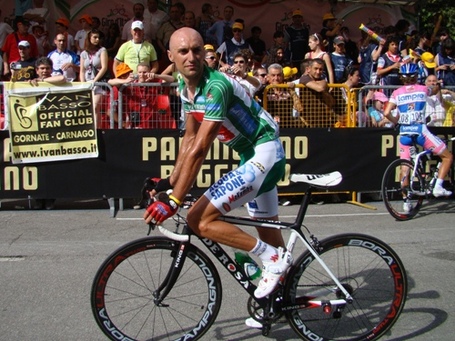 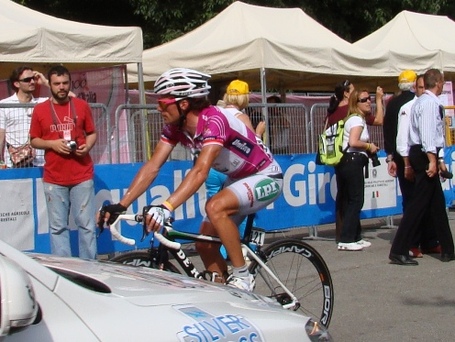 Cavendish came on foot, then waited next to the podium for the ceremony to begin. 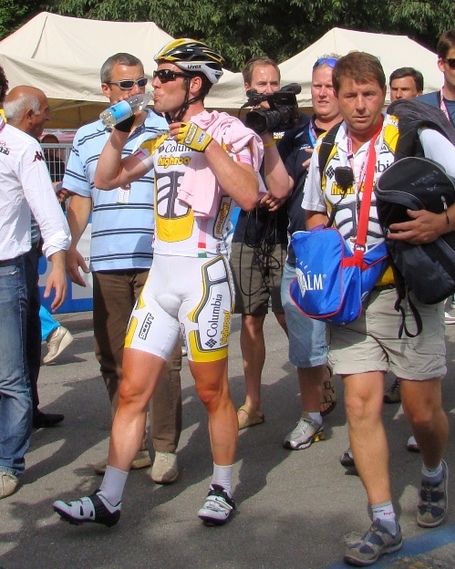 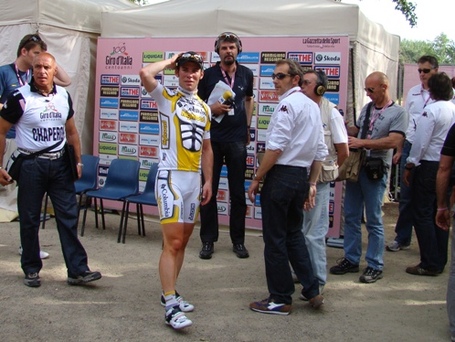 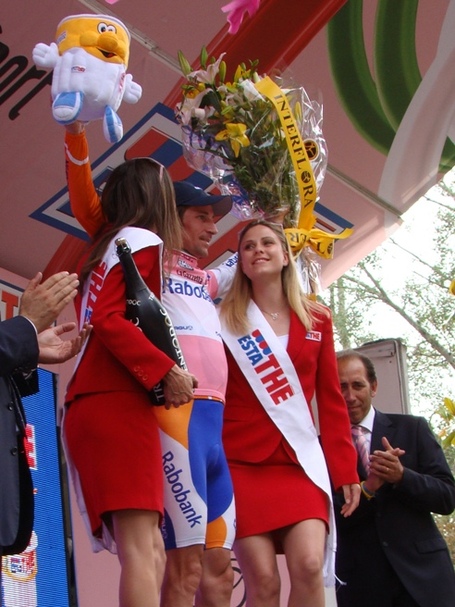 His Giro done, Cavendish could indulge in a long swig of champagne. 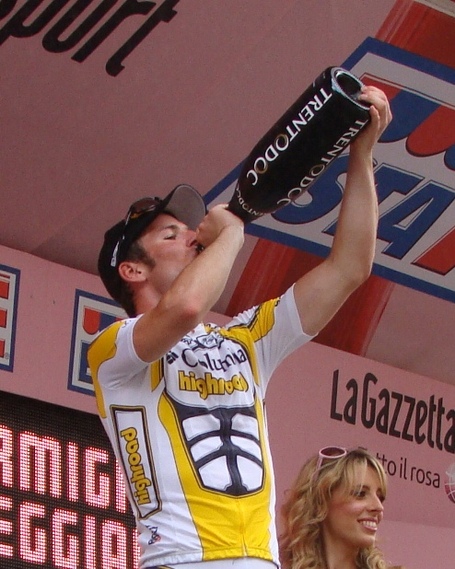 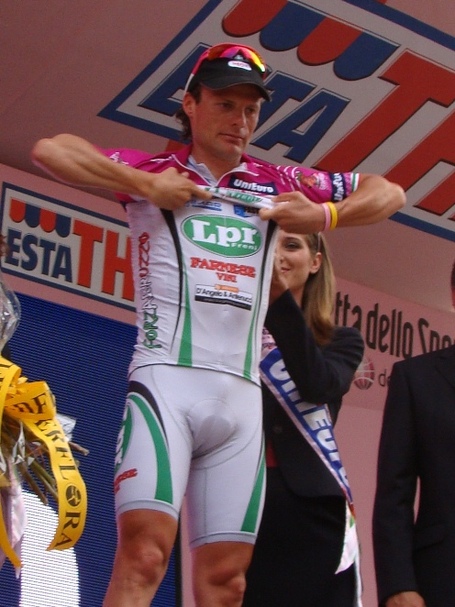 then cracked up when the bouquet he tried to throw into the crowd got stuck in a tree. 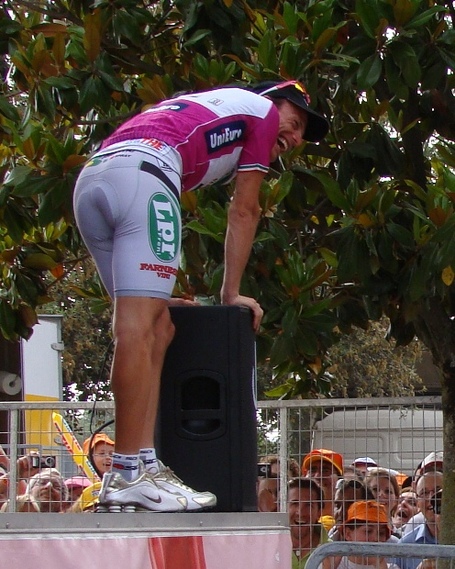 Yesterday was the first day I've ridden my bike on this this trip, and it was so much fun!  We did a flat, 30-mile ride into Bologna; a perfect, easy, first ride.  The plan was to ride the finishing climb and watch the race at the top, but when I got to the base of the climb at around 4:00, the road was already closed to both cyclists and walkers.  The only option was to walk up the walkway alongside the road (covered by the world's longest portico, I learned on my last trip to Bologna).  I'd walked up there before, so I knew there were a lot of stairs, but I decided to take my bike up anyway, thinking I could at least ride down.  About halfway up, there was a place where it was easy to get onto the road, so I  jumped on my bike there and rode to the 300-meter mark.  There, I was stopped and told that I could go through on foot with the press pass, but I couldn't take my bike with me.

After I locked up my bike, I was thinking that maybe I would just stay and watch the race there, since it looked like a good spot.  Just then, I heard someone call out to me, and it was Wynn and Nick, two British guys I had met the day before in Firenze, so I watched the race with them.  That's them on the right: 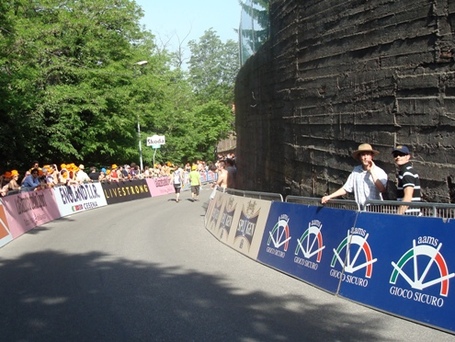 Wynn was very excited after the race passed by because he's a big Lance Armstrong fan, and he got a great shot of Lance as he came by us.  Unfortunately, I was not so lucky with my photos.  When the bigs (or i big, as they're called in La Gazzetta) came by, I was too busy banging on the barricades and yelling to take pictures, and after that, I didn't really get any good shots.  I only had my pocket camera with me, since I was on my bike, and the glare of the sun on the white banner across the road whited out my pictures.  Here's the few that are the best of the lot: 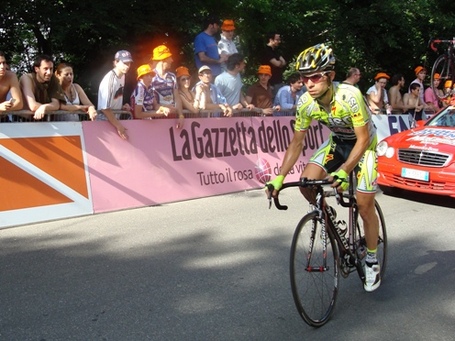 Basso on his descent encounters a teammate still on the way up. 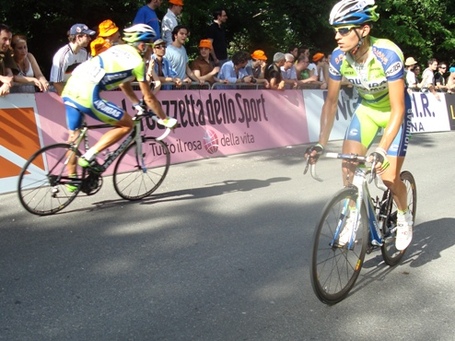 Gibo got a lot of cheers as he descended. 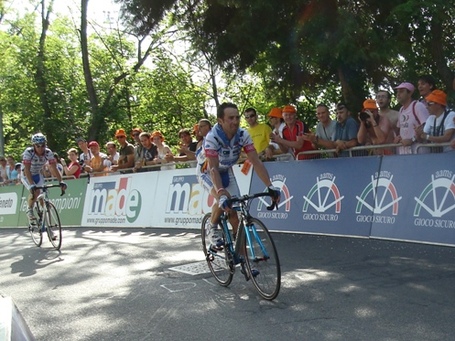 I took a day off today to visit Perugia, a city I remembered fondly from my first trip to Italy, but I'll be back at the race tomorrow.  A domani!