Giro d'Italia, On the Scene at Stage 16

Share All sharing options for: Giro d'Italia, On the Scene at Stage 16

For the riders, it was a Monday in hell.  For me, another fantastic day at the Giro. 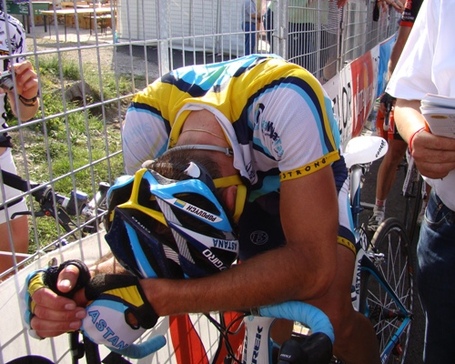 Story and more pictures on the flip...

I enjoyed tghe ride up to Monte Petrano from Cagli, even with the ridiculous heat.  The first half of the climb was quite hard, and I was glad I had looked at the profile in the morning, so that I knew it would get easier.  The second half of the climb was more open, with long strairghtawsys between the switchbacks.  Here I am at 3k to go, and under the 1k arch. 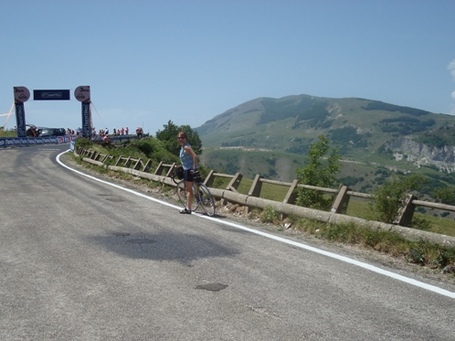 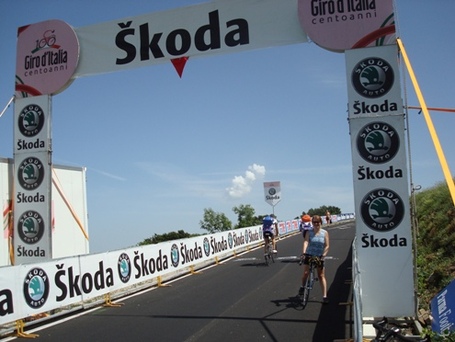 I rode up in the early afternoon, and although the crowds were not massive, everyone seemed in a festive mood.  A group picnicking under the awning of a campervan on the inside of a switchback cheered for me as I passed, and after I rounded the swirtchback, one guy ran to the road, holding out a plastic cup to me.  "Acqua?" I asked.  "No, vino!" he said enthusiastically.  Ha!  Just what I needed in the middle of a climb in 90-degree heat.  I had to decline, and a bit farther up, I declined a similar offer from another party of picnickers.  Now, if anyone had offered me cold water, I would have been all over it.

At the top, it was still early enough that the security guy directing people off the road at the 150-meter mark, upon seeing the press pass, let me ride right across the finish line.  I've never been able to do that before; it was pretty cool.  Just across the line, as I was trying to figure out where to leave my bike for easy access after the race, one of the race organization guys struck up a conversation, asking me about the ride up.  Before long, one of his colleagues came up and jokingly warned me that I'd better be careful, because the man I was talking to had a very jealous wife.  "He's from Sicily," he said, "and you know what that means!"  After assuring me that he was actually from Varese - where, presumably, the jealous wives are not so lethal - my new friend asked if I wanted a bottle of water.  Yes!  Now he was my new best friend.  He led me to the area behind the podium stage where the bouquets and prizes were being laid out for the ceremony.  In addition to a lovely bottle of cold water, I got a demonstration of how the team decals are put on the jerseys for the ceremony. 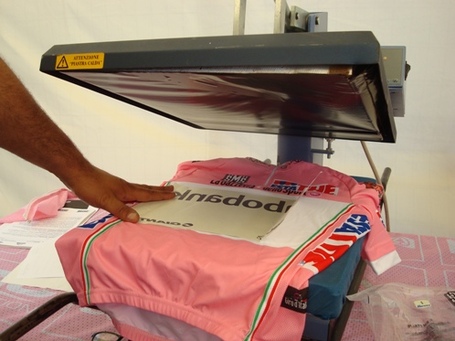 The guy in charge of the jerseys very entertaining.  I asked if he had the jerseys in various sizes, and he said he had extra small, small, medium, and large.  He doesn't have a list of the riders' sizes, he said, he can tell by looking at the riders which size they need.  I wanted to say, "so, you estimate with your eyes," but I couldn't think of the Italian word for estimate, so I said something like, "so, it's not exact, it's done with your eyes."  "It is exact," he corrected me, "with my eyes."  He ran through some examples, "Di Luca: extra small, Basso: small, Cavendish: small, Petacchi: medium.  Actually, he clarified, Petacchi was a medium at the start of the Giro, but now he'd lost weight, so he would be a small.  Di Luca was an extra small, he explained, because he likes the jerseys to be snug, whereas Basso likes them looser.  And Menchov?  Medium.  "But maybe today," he joked, "with all the sweating, Menchov will be a small."

At the finish, most of the riders looked about how you'd expect people to look after a 237-kilometer mountain stage in horrific heat.

Sastre, in his element, looked better than most after crossing the line. 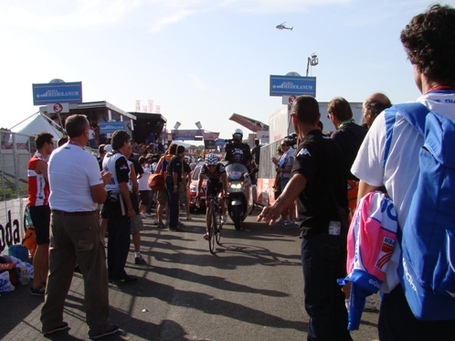 Armstrong and Leipheimer finished together, both looking pretty ragged. 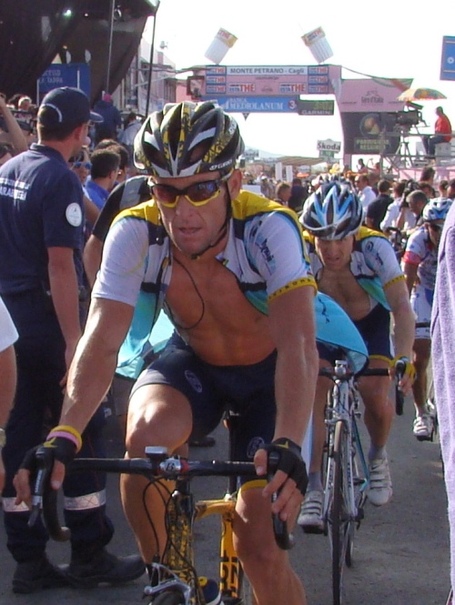 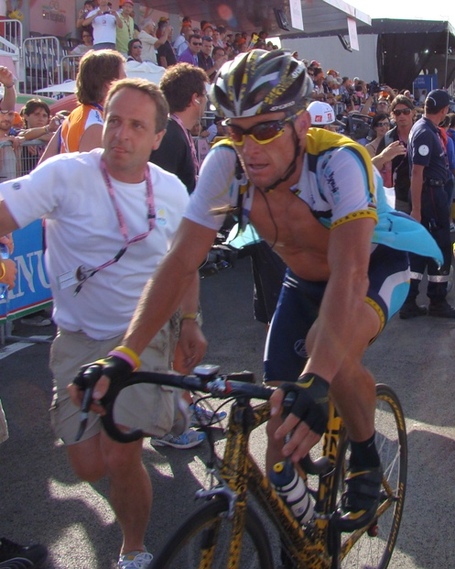 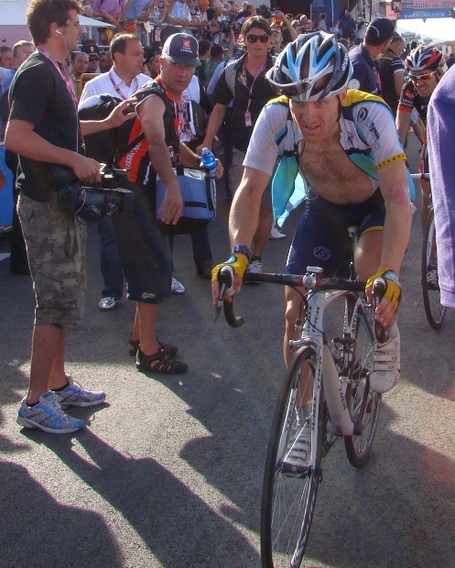 Popovich, having left everything on the road, collapsed against a fence after finishing, as seen in the photo above the fold.  When he finally raised his head, he didn't look much better. 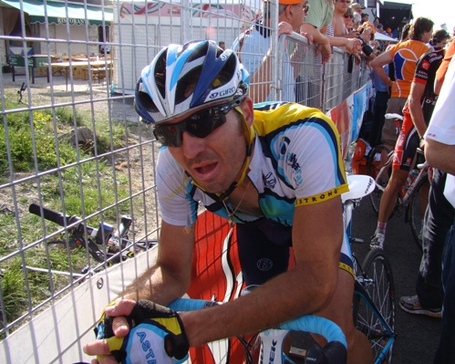 Valjavec is helped off his bike. 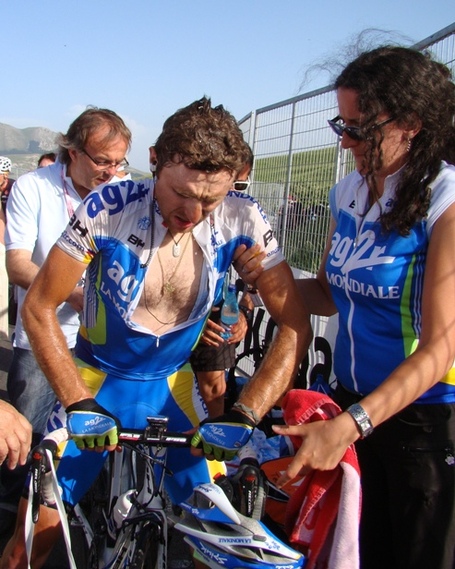 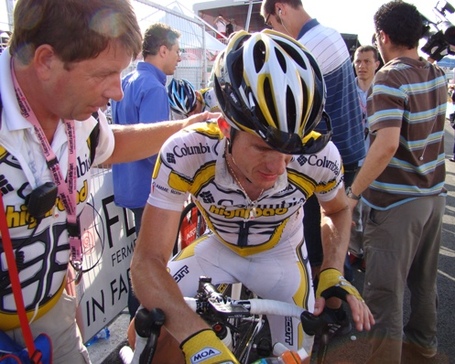 Basso glistens in the sun as he prepares for the ride down.  It takes more than 237 kilometers in hell to put a dent in his glamour. 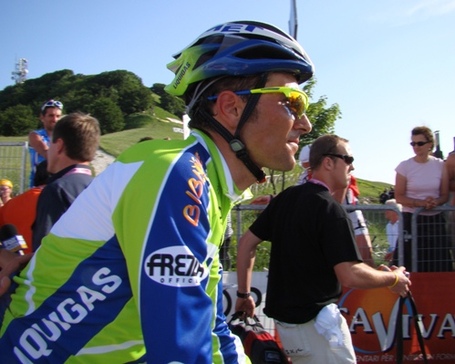 Lovkvist lost the maglia Bianca to Kevin Seeldrayers on the stage. 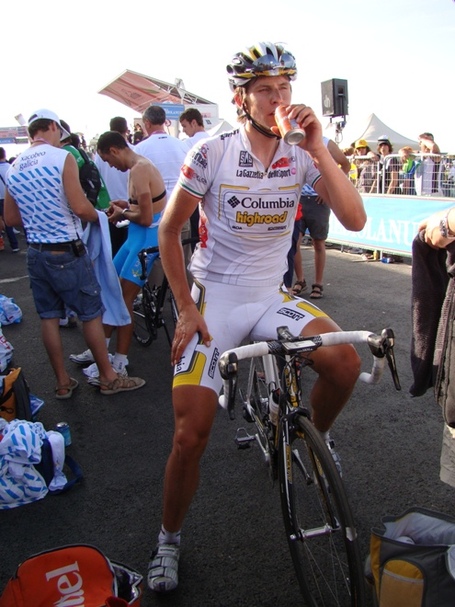 Scarponi, who's having a fantastic Giro, actually smiled as he finished during Sastre's podium ceremony. 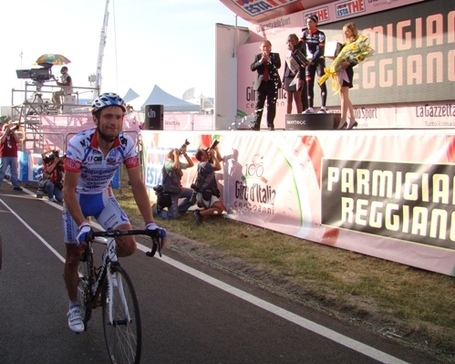 Simoni, whose Giro is not going as well, poured water over the back of his neck before changing into a dry shirt for the descent.  Finally, he, too, managed a smile for the tifosi. 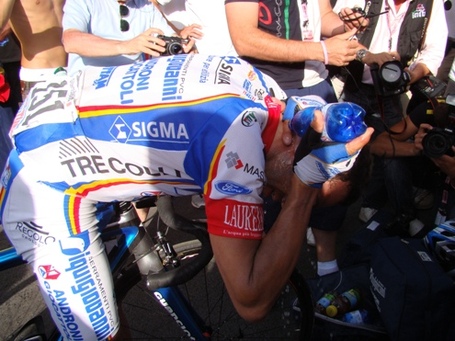 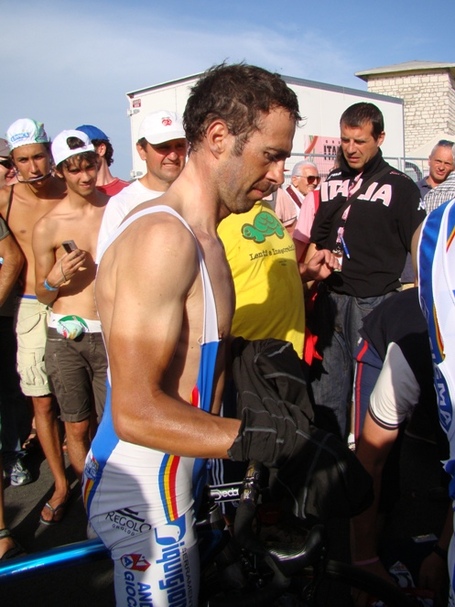 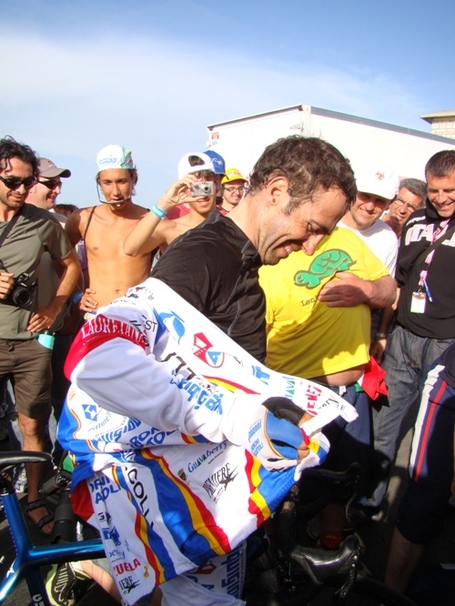 Di Luca getting ready to ride down after the podium ceremony. 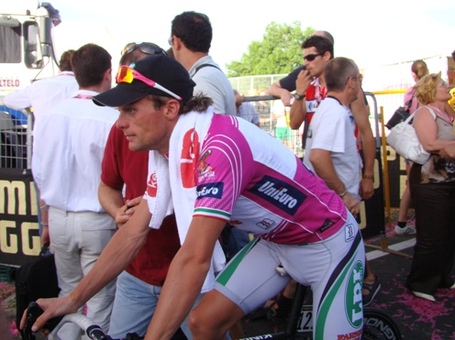 Riders with less to show for their suffering finish as Menchov pulls on the maglia rosa. 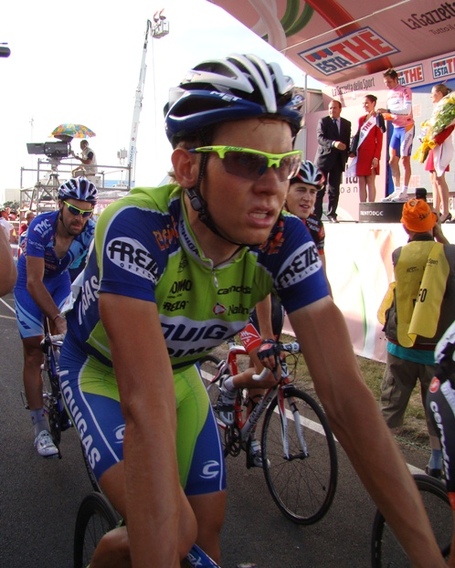