Share All sharing options for: Giro d'Italia Stage 1: The Cronosquadre! 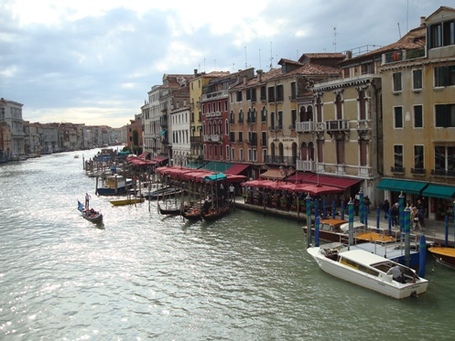 As you know, Gavia has a new gig over at Steephill.tv, whose Giro d'Italia dashboard is pretty much everything you need to know (as opposed to the more, um, optional information that we specialize in here). So for each stage preview, while I will add updates and thoughts, I will also grab the key nugget from Gavia's work and suggest that if you want the whole skinny on any race, follow the link provided to read her previews back to front and back again. [And yes, this is an approved arrangement, not me stealing their stuff.]

For the Stage 1 team time trial in Venice, Gavia says:

The Centenary Giro opens with a team time trial on the Lido di Venezia, a narrow, 11 kilometer long sandbar that sits between the laguna di Venezia and the Adriatic Sea. The out-and-back course is completely flat, beginning in town and traveling along white sandy beaches. Assuming normal wind directions, a tailwind will encourage the riders toward the turnaround. On the return trip, they will ride against the wind to the finish.

It doesn't get much simpler. Hell, local amateur races here in the Northwest don't get much simpler than this stage. No tricks and turns, no climbs, just a pure wattage-fest for 20.5km. So technique isn't the variable it might normally be in a TTT. I can rationalize this by admitting that teams spend so little time on this discipline nowadays that maybe it's just as well. Anyway, the time gaps should be minimal.

On the flip: We've got start times!

Start times! For reference, I believe 15.35 is 9.35am US EDT and 6.35am Pacific. Please correct me if I'm wrong. And from Steephill's coverage it appears Universal Sports will be live from the get-go.

Picks? Garmin are the favorites. Columbia are a possibility but going first, I dunno. Astana would be tough, but they rode poorly last week in Romandie and probably haven't spent as much time preparing for this stage as Garmin. I would also expect the big three Italian teams to do well, with so much at stake. Liquigas have won TTTs occasionally, though the last one was with DiLuca, though that does not in turn make LPR a favorite. La Gazzetta is dreaming of Pippo in Pink, though I don't know why Katusha would be among the strongest. One random thought -- if it's this short and straight, are sprinter types (e.g. Petacchi) just as valuable as your usual crono horses? My picks: