What is it? Memoir of Mark Cavendish's career to date, focusing on the 2008 Tour de France.

Weaknesses: Chances are you've heard a lot of it before.

"Numbers don’t lie." Sebastian Weber of T-Mobile wasn’t the first coach to give Mark Cavendish this news. The kid just wasn’t made for road racing with his short-legs, long body, tendency to self-medicate bouts of depression with bag after bag of Walker’s crisps, and above all his inability to produce the proper numbers in tests on a stationary bike. 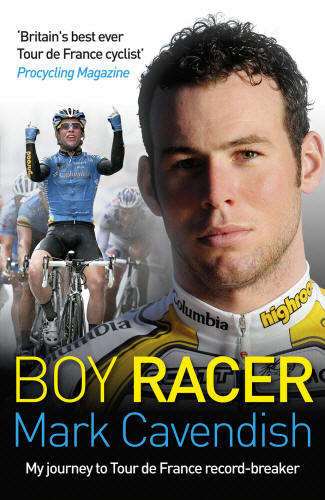 Painful as it might be for a numbers junkie to admit, if you’re here on Podium Café you know full well that in Cav’s case the stats are dead wrong. Or rather, they’re just another of the aggravations that the arguably world’s fastest sprinter has used as fuel to power his increasingly impressive palmares, which include nine Grand Tour stages (to date) and Milan-Sanremo, the first monument he ever attempted.

How does he do it? In Boy Racer, Cavendish claims that he needs two things: the praise and adulation of others (or, as he puts it, "sunshine blown up my arse"), and the above-mentioned aggravation—but you’ll find few if any examples in the book of Cav being jollied into a win and plenty of his anger carrying the day. From his mother telling him he was so slow in a childhood race he looked like he was out for a Sunday stroll to rivals such as Tom Boonen scoffing at his inability to get over hills, Cavendish thrives on the scorn of others.

Love the man or hate him, you won’t find much in Boy Racer to change your mind. It’s pure Cav—honest, outspoken, occasionally aggressive, imbued throughout with that trademark self-confidence you already find either charming or annoying. It won’t give you an in-depth look at what made him the champion he’s become: he touches only briefly on his childhood and personal life (nothing, unfortunately, on his ballroom-dancing days), focusing instead on his meteoric career. The book is organized around the stages of the 2008 Tour de France and his four wins there, with an epilogue covering the Olympics and Milan-Sanremo. Interspersed with details of the struggles and triumphs of the day are flashbacks telling the story of how he got there.

Much of the information is familiar from interviews and profiles in the cycling press—face it, the kid is barely 24 and this is his only his third year as a pro, so there’s only so much ground to cover—but there are nuggets that make this an absorbing read. His side of notorious conflicts with Pippo Pozzato and Mario Cippolini. The at times tense team rivalry with Andre Greipel. Brief but amusing glimpses of his other teammates. The things that go through his mind during a sprint. A truly appalling account of the deficiencies of ACE, the company Team Columbia used for their internal testing program—not only were their protocols substandard compared to official testing, but one technician mangled a blood draw so badly that Cavendish was allowed to opt out of further tests.

Even if you’re not a fan, this kind of peek into the peloton makes the book well worth reading. But if (like me) you do harbor a certain fondness for the Manx Express, chances are you’ll tear through this book with sheer delight and find yourself quoting bits of it for weeks to come. And that’s not just blowing sunshine up the author's arse.