First, let's start with the lists--the Top 25 VDS Scorers from this point last year and this year. Right-click and open in a new window to make bigger, or click here. The colors don't mean anything, they're just an easy way for you to find the same riders in both lists. The grey-shaded names in the 2008 list do not appear on 2009; the unshaded names on the 2009 list did not appear on 2008. The column in between shows how many points this year's Top 25 made in last year's Tour de France. 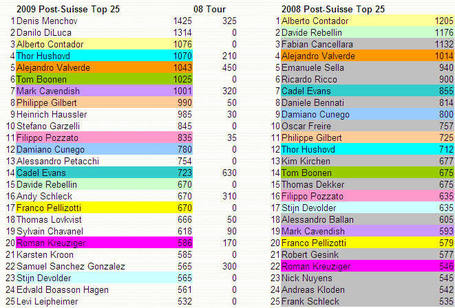 Hot and Consistent: 13 of last year’s Pre-Tour Top 25 made this year’s Top 25 again. Of these, 9 are within 300 points—a couple of good or bad days’ difference—of their points last year: Contador, Valverde, Gilbert, Pozzato, Cunego, Evans, Pellizotti, Kreuziger, and Devolder.

Special credit goes to Philippe Gilbert, though, who appeared on the Post-Roubaix Not list. In mid-April he was 390 points behind last year, a deficit I stated at the time would be “hard to make up.” Since then, he’s not only made up the missing points but jumped 265 ahead of where he was last year. I’d be miffed that he showed me up so badly if he weren’t on my team. Chapeau.

Three others (Lovkvist, Leipheimer, and Chavanel the Greater) were not on last year’s Top 25 but made this year’s with a less than 300-point increase. Consistent, and going up--two good qualities to have in a VDS pick.

Lots more below the fold...

Hottest of the Consistently-Hot: 3 riders from last year’s Top 25 returned with significantly more points: Boonen (+350), Hushovd (+358), and Cavendish (+408). Sprinting + success in the classics = a good chunk of VDS points. But only Cav has added significantly to his post-Roubaix total, adding 486 points since mid-April while Hushovd and Boonen have earned just 110 and 100 points respectively. Imagine where Boonen might be if he bothered to sprint for 2nd…

Still on list but getting colder: Davide Rebellin, as in dead-cold. Popped for doping at last year’s Olympics but still denying guilt, he’s out of the game unless he wins his case. Don’t hold your breath.

The Giro was good to more than half of these, while Haussler and Schleck are still up there due to breakthrough performances in the spring. Kroon topped a nice spring with a good handful of points from the Eschborn-Frankfurt City Loop, while SamSan started off strong in Pais Vasco and the Ardennes, but hasn't done much since.  EBH combined a big win in the spring with a decent Giro and as of today is Norway’s TT champ for the third time in a row—remember that this guy just turned 22 and just try not to be impressed.

Of the Newly Hot, only Menchov, Schlecklet, and Haussler have been confirmed for the Tour, where last year they earned 325, 310, and 30 points respectively (but that was before HH became GHH).

The Not List.
12 new guys on the Pre-Tour Top 25 means 12 have been dropped from last year’s list. 3 of them, Kloden, Nuyens, and Gesink are down fewer than 300 points so not cause for great concern. Big Schleck is short 310 points (while his brother is up 320…hmmm…), so he’s on the bubble there—significantly down, but still within relatively easy range of making it up.

Sella and Ricco are on enforced extended vacation, leaving 6 guys who are...

Cancellara recently rebounded with a big win in the Tour de Suisse—where Kirchen also won a stage, Freire claimed three stage podium spots, and Dekker finished a strong 3rd in the final time trial. With luck, those results presage good things to come. Bennati, though, hasn’t scored a point since MSR and Ballan has yet to earn his first. All six of these guys should be riding the Tour, which is rich with opportunity to turn things around. But that’s a lot of ground to make up.

Update on others from the Post-Roubaix Hot/Not list:
Antonio Colom: 390 points made him Hot in the spring, doping bust makes him so very, very Not now. If to Schleck is to crash oneself out of competition, what should be the verb for to dope oneself out of VDS competition? I can think of examples from this and last year, but am appealing to someone who was around during the first VDS season to provide an illustrative case.

Hot in the spring: Marcus Burghardt. Not a point since Gent-Wevelgem, but since he’s still 405 over his entire point total last season, I’d rank him Warm. Confirmed for Tour.

Not in the spring: Enrico Gasparotto—Earned his first 60 points in the Suisse tour. Thawing out? Short-listed for Tour.

Kurt Asle-Arvesen—Still at 40 points. Icy as the Norwegian fjords. Confirmed for Tour.

Rinaldo Nocentini—Earned 120 points in the Ardennes. Still 320 down compared to last year, though. Very cool, and not in a good way. Short-listed for Tour.