Police in Rome have confirmed that Girbecco, mascot to the Giro d'Italia, is dead at the age of 25 (goat years). The iconic pink-clad, bicycling stambecco was found brutally murdered in a warehouse near the airport outside the city. A massive manhunt is underway across Rome, as police track down various clues to the identity of the killer. In a statement issued this evening, police have only said that they will not comment on the case, out of respect for Girbecco's family and for the legal process. However, sources close to the investigation say that the murder weapon was an IKEA brand kitchen knife, with traces of herring on the blade. Columbia-High Road cyclist Thomas Lovkvist has been brought in for questioning, though he is not considered a person of interest.

Members of the Xacobeo-Galicia cycling team reported they last saw Girbecco leaving the team's post-Giro party at a popular Roman discotheque, with two unknown blonde women, in an unmarked limousine, at about 4am Monday. While Girbecco was seen drinking, people who saw him leave did not believe he was impaired or in any other way behaving conspicuously. No witnesses have claimed to recognize the two women in whose company the goat was last seen.

Police have released a photo of the murder scene. Due to its graphic nature, I have placed it on the flip. If you are sensitive to graphic scenes of violence, or are in the presence of young children, I URGE you not to continue reading this story. However, because of the extraordinary interest in this case, we are making the picture available. Our thoughts and prayers are with Girbecco's family, and all the goats of Abruzzi, on this tragic occasion. 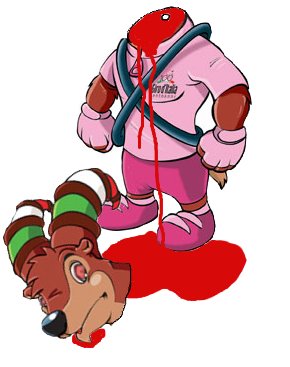