Why Not Me? Andy Schleck

Share All sharing options for: Why Not Me? Andy Schleck 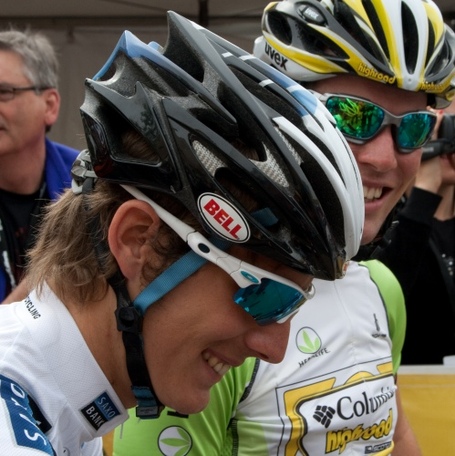 What do we know about Andy Schleck, the grand tour rider? We all noticed him for the first time in the 2007 Giro d'Italia when he rode to a consistent second place. We watched his inaugural Tour de France last year, when he worked alternately for his brother Frank and eventual winner Carlos Sastre. We have marveled (drooled?) over his massive potential, and nodded respectfully on occasions -- like this April 26th when he bagged his first monument -- when that potential was suddenly, swiftly and brutally unleashed.

Yeah, Why Not Andy?

Schleck the Younger is the whole package, as far as the cycling season is concerned. We know he can beat the world's best one-day riders as we saw in La Doyenne. We know he is an elite climber, in grand tours and otherwise. To me his most impressive day on a bike was also Sastre's: taking third on Alpe d'Huez last year, even after working to set up his captain, and while seemingly (obviously) holding back once Sastre was up the road. Now he's the captain of Riis Cycling's Tour team... the same team that engineered Sastre's win in 2008. And he just sauntered away from the field to win the Luxembourg National Championship, so he's in shape, following a cautious program that has limited his days in the saddle for just this moment.

While Andy is a climber supreme, he probably gains some advantage by the course containing a toned-down course of Pyrenean climbs, if only because he kicks ass at those too, while guys like Sastre or Leipheimer (maybe even Contador) don't excel until the road really tips up. If Schleck has a weakness, relatively speaking, it's in the crono, but the course also doesn't emphasize time trialling nearly as much as some past editions, and swings back in his favor by replacing some individual crono KMs with a team event, where Saxo should expect to do well.

There simply isn't anything he does better than Alberto Contador. Granted, this will be their first head-to-head matchup in a grand tour, but the cumulative H2H score is 24-4 in favor of the Accountant. The four in favor of Andy are relatively meaningless -- instances where they rolled in among the non-sprinters -- while Contador wins time trials and mountains alike. If something stops the Spaniard from his destiny, then it's game on for Andy. Really, other than inexperience and a slight weakness in the time trials I can't think of any further reason to say no. I just don't see him overcoming the rider who may be the preeminent stage racer of his era.