This morning in Paris, ASO officials confirmed the identity of the new mascot for the Tour de France. Identity revealed... on the flip! 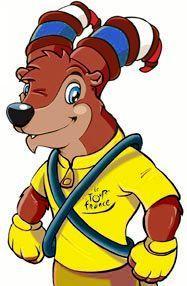 After considering several versions of a marmot, the iconic creature of Alpe d'Huez, Tour de France officials decided to pay homage to slain Giro d'Italia mascot and have named his cousin Tourbecco, from the Provence branch of the stambecco family, as the official Tour mascot. Girbecco's parents, adorned with the black horn socks of mourning, attended the announcement and spoke with appreciation for the Tour's gesture. "Our son is gone, but his memory survives."

Tourbecco did not grant any interviews, though he did perform some bicep flex demonstrations for the media. Later, in a prepared statement, Tourbecco did make fun of Quick Step's "boring kits" and advised fans to "bet the farm on Valverde."