Giro d'Italia, On the Scene at Stage 21

Share All sharing options for: Giro d'Italia, On the Scene at Stage 21 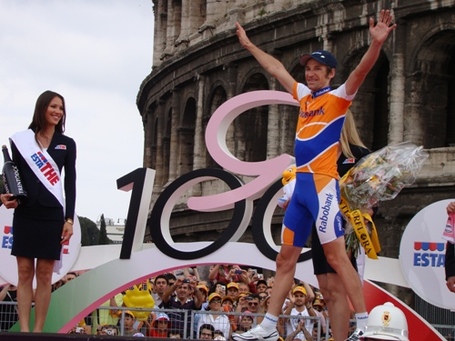 The setting for the Giro finale could not have been more dramatic.  It was so much more special than the usual finish on Corso Venezia in Milan, marking a fitting end to the spectacular centenary Giro.

As usual on the last day of the Giro, the normal restrictions on who could go where in the finish area didn't seem to apply, so while the early riders were finishing, I watched from the spot just after the finish line that's generally reserved for those with photographer passes. 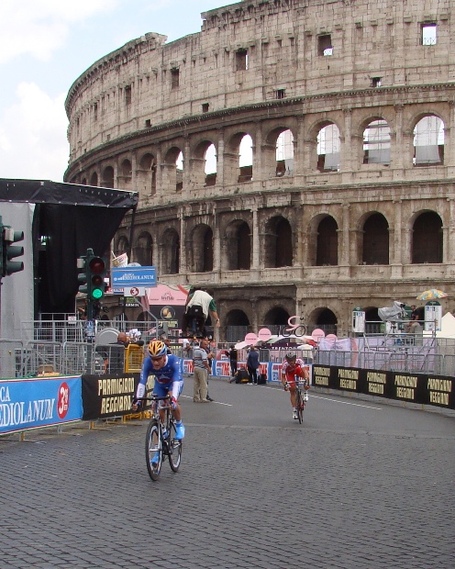 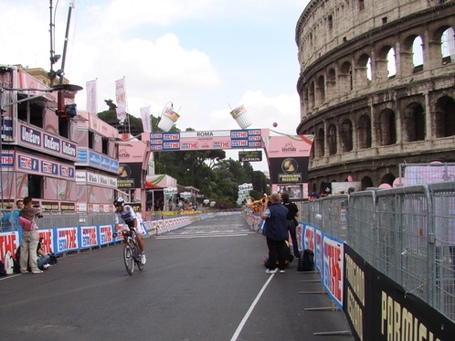 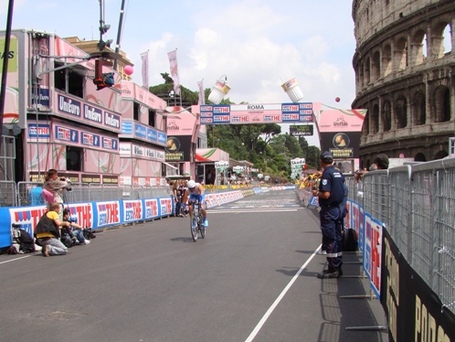 Gibo Simoni, one of my all-time favorites, did an extended interview with di Stefeno after crossing the finish line.  At the end, they kissed each other on the cheeks, and I was saddened to think that it was probably a kiss goodbye.  I doubt we'll be seeing Simoni ride another Giro. 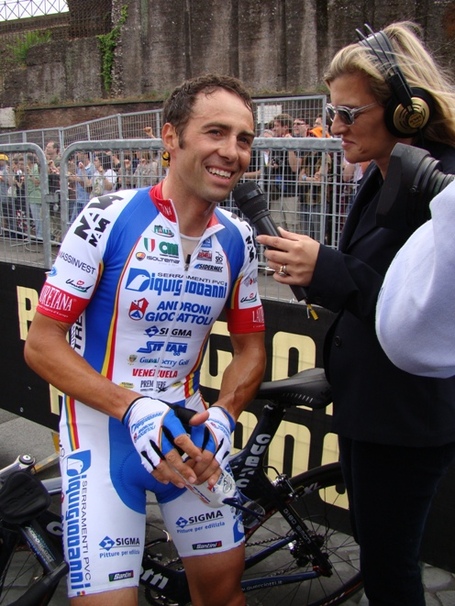 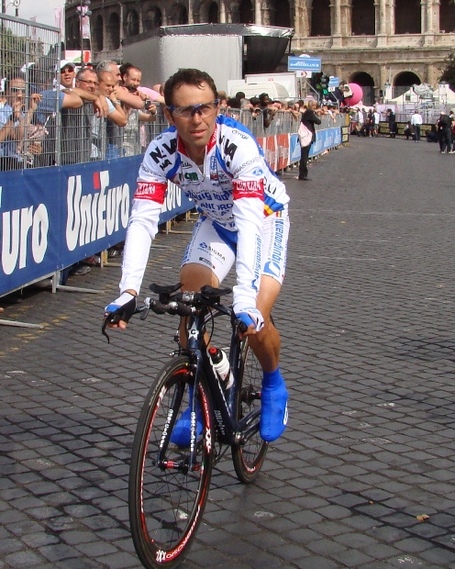 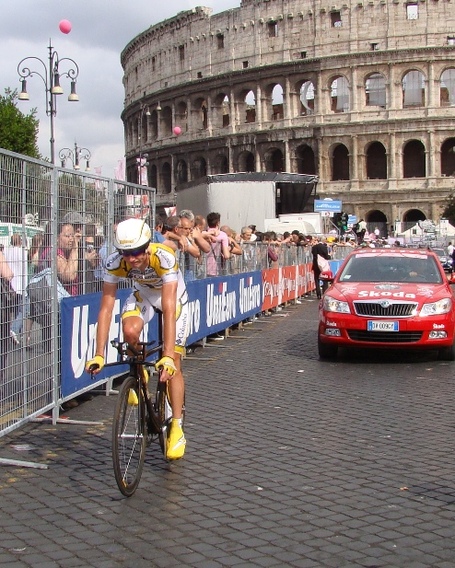 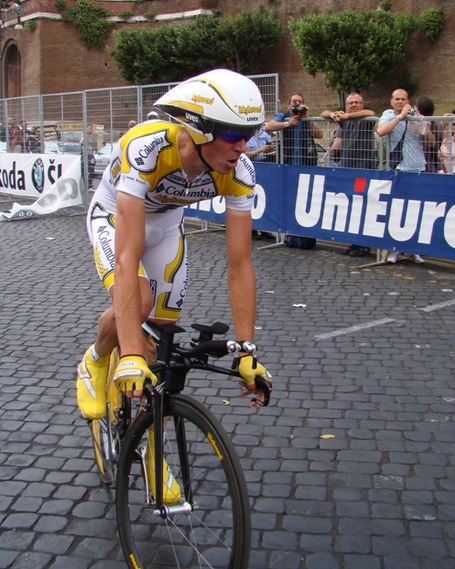 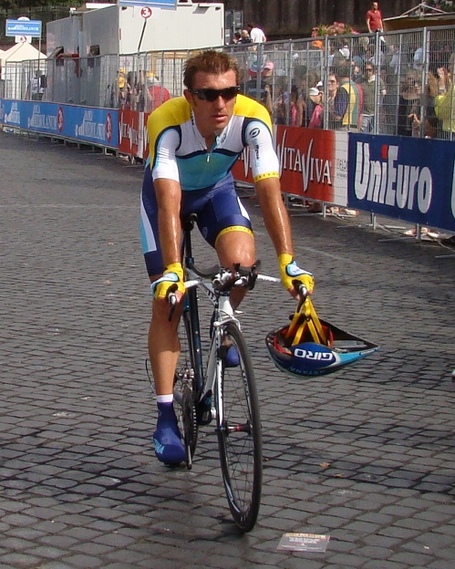 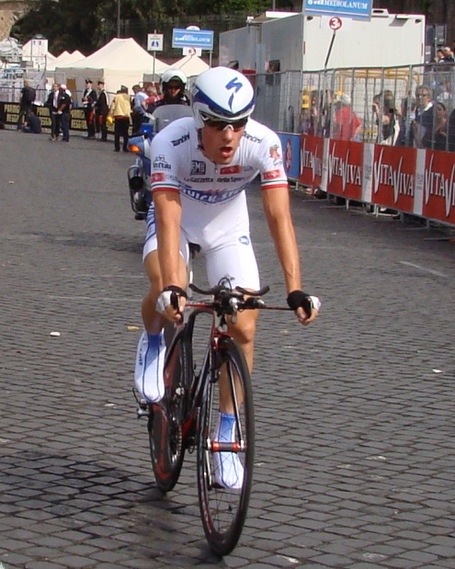 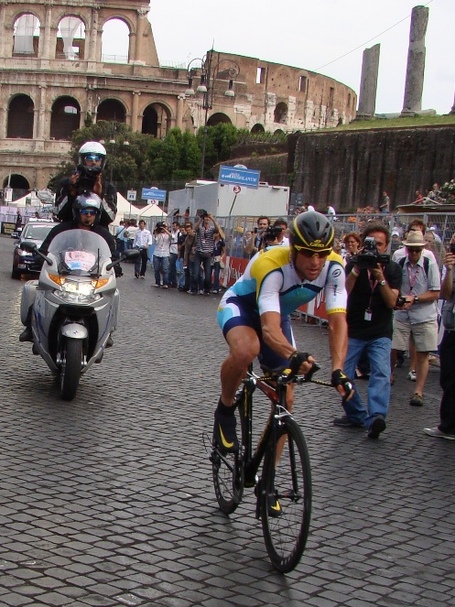 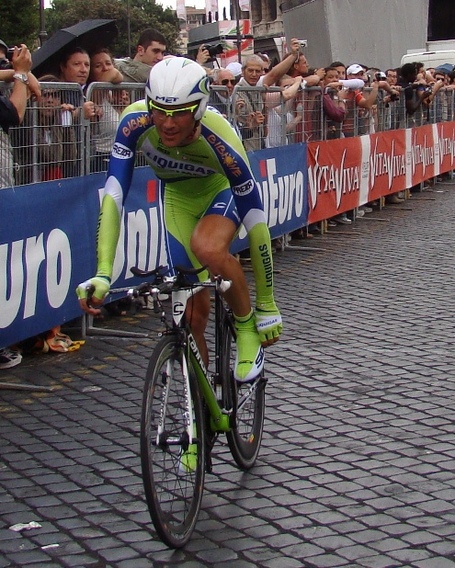 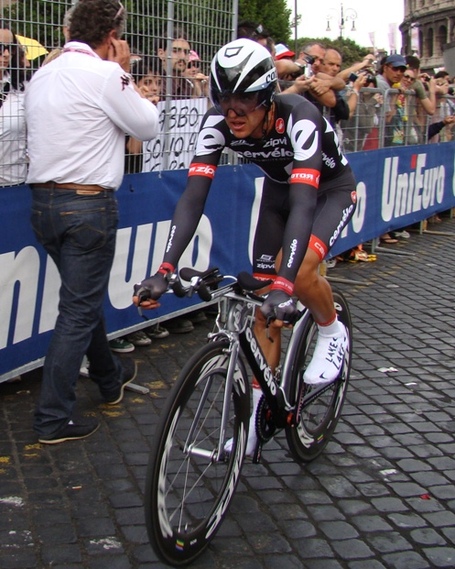 Menchov was an explosion of adrenaline and joy when he crossed the finish line just moments after his crash: roaring, leaping into the air, flailing his fists around.  It was awesome!  I've never seen anything else like it. 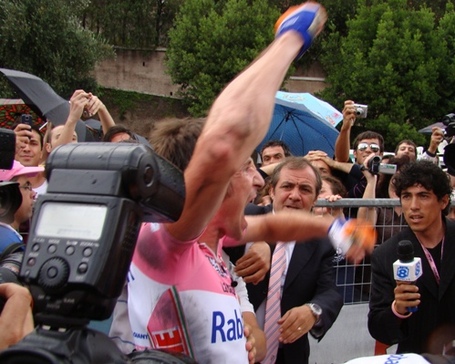 There was a long delay before the podium ceremony, and then there was a call for medical personnel to come to the presentation area, so we wondered if Menchov had been hurt in the crash, but a few minutes later, he ran past us to embrace his fans. 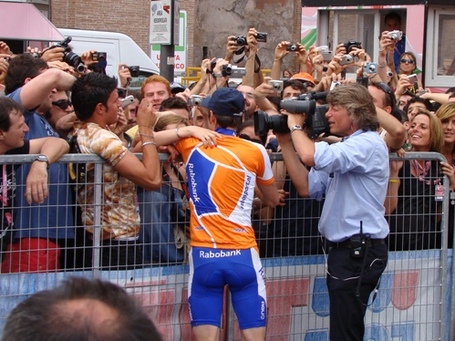 Menchov's exuberance carried over onto the podium. 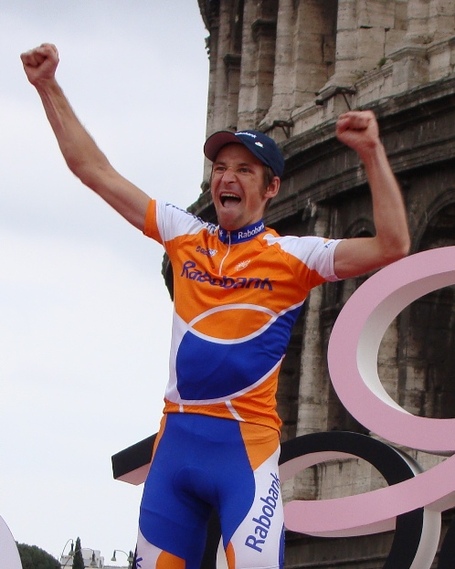 Throughout the Giro, Menchov and Di Luca demonstrated mutual respect and admiration, and on the podium, they closed out their epic battle with an embrace. 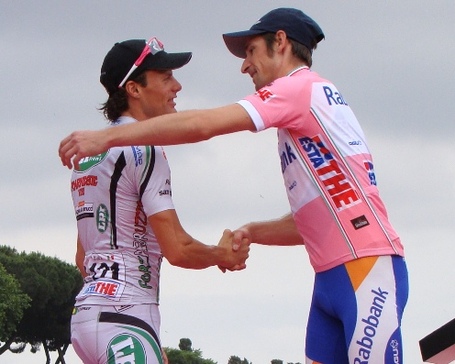 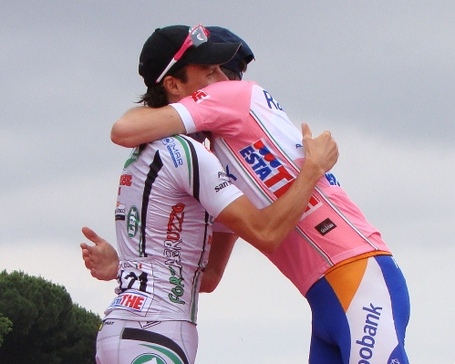 The top three on the podium. 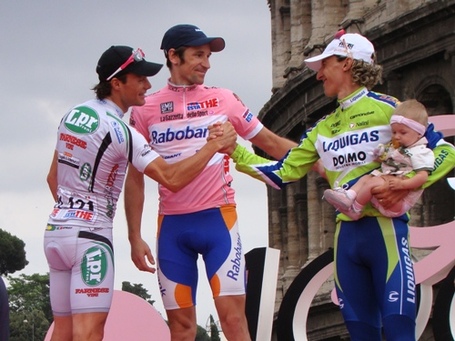 Coming onto the podium to accept the maglia ciclamina, Di Luca enjoyed the cheers of the tifosi, then sprayed them with champagne. 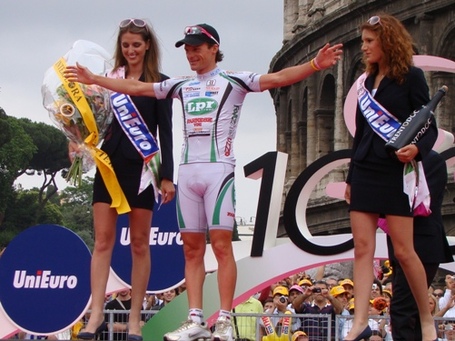 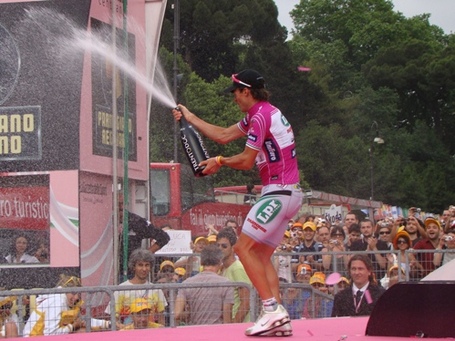 Di Luca's wife is as pretty as he is. 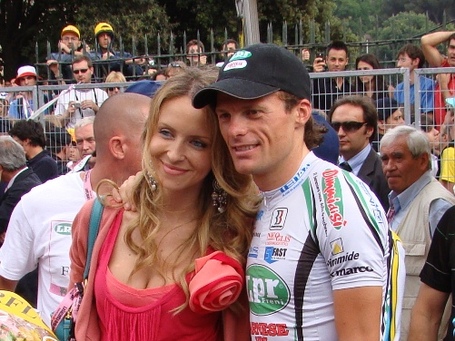 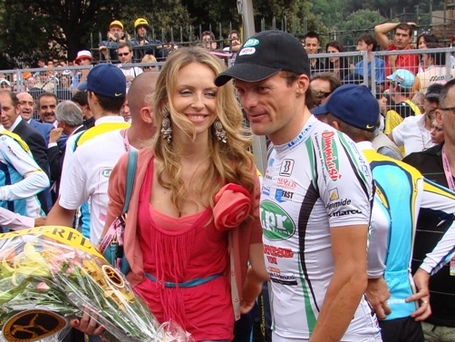 As the last riders prepared to leave the presentation area, Sastre had a chat, Quinziato had a laugh, and Di Luca, as always, had more autographs to sign. 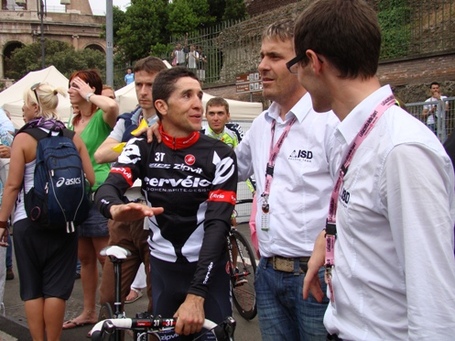 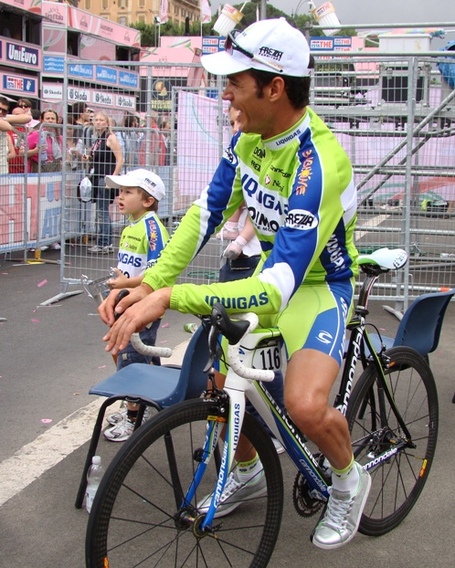 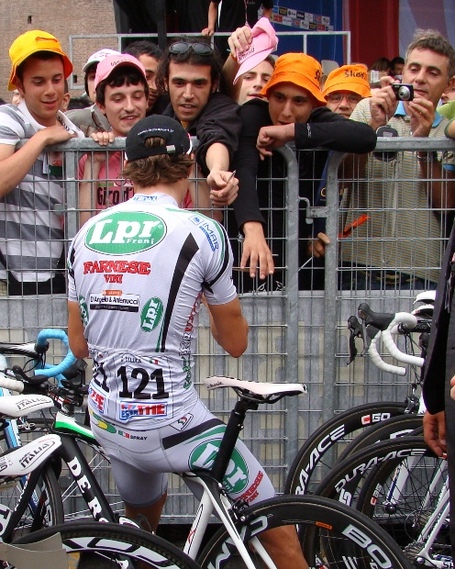 I'll close with a picture that is one of my best souvenirs from the Giro.  Two of  the coolest people I met in the pressroom this year were Tom Van Asch and Patrick Verhoest, who were there representing the Wielermuseum, a cycling history museum in Roeselare, Belgium.  Patrick emailed me this picture that he took of me (in the green shirt) asking Di Luca a question at the press conference in Bergamo.  How cool is that! 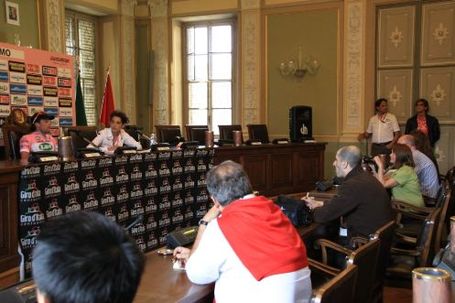