Last year, I started out this preview by saying "And thus we approach the end of another Philly Week." Alas, that may have been the end of all Philly weeks. 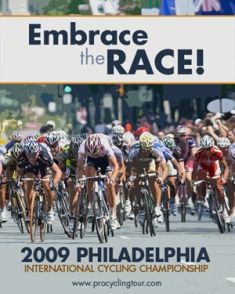 It's been a very tough year for US domestic professional cycling, and the demise of the Commerce Bank Triple Crown Series - better known as "Philly week" - was one of the highest profile losses.  It wasn't, thankfully, a complete loss, as the organizers were able to put together some last minute deals to salvage the closing race.  Known this year as the TD Bank Philadelphia International Cycling Championship, it represents the 25th edition of a long and storied race.

The men will race for 156 miles on a 14.4-mile circuit along the Schuykill River for ten laps.  That means 10 climbs up the Manayunk Wall, which reaches grades of 17%. They will then finish with three smaller laps around Lemon Hill and Logan Circle, in front of the Philadelphia Museum of Art.  Men's start list is here.

The course is a relatively flat and fast circuit with one serious bump in the middle - the Manayunk Wall.  While it's not even a 250 foot elevation gain, that gain happens in a lot less feet than you'd like.  Watching it last year, it acts as a pretty tough filter for the race - if you're going to pop, this is where it will happen.  The finishing laps have a much easier climb up Lemon Hill, which may serve to slow things down a little bit, but it won't create any selections. 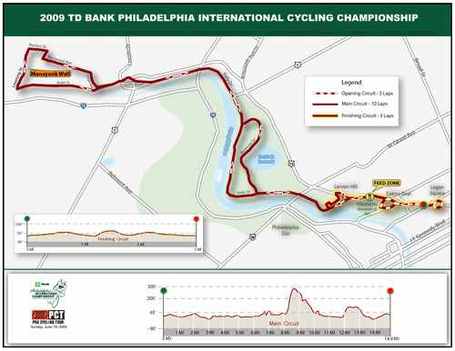 Unlike last year, the weather should be good for racing - we're looking at upper 70s/low 80s, and partly cloudy.

The race is not being televised live, so I'm not expecting any sort of live video coverage.  You should, however, be able to get an audio feed at KYW Radio online (or 1060 AM if you're within range).

In the men's race, it's hard not to look at Columbia-Highroad's Edvald Boasson Hagen or former winner Greg Henderson.  Team Type 1 may be able to build on the recent podium successes of Kenneth Hanson and Shawn Milne.  And I guess that one must mention that 3-time winner Freddie Rodriguez will be there for Rock Racing, but the last time I recall him on a podium was at last year's edition of this race.  If I were going to make a single pick, though, it would be Kelly Benefits Strategies' Scott Zwizanski.  He's local to the area and in great form, having been one of the primary animating forces in both the Clarendon Cup and Air Force Cycling Classic last weekend.

On the women's side, there's no shortage of big names. Columbia-High Road will presumably be working for Ina Yoko Teutenberg, who is no stranger to the podium here. Colavita-Sutter Home has a trio of possibilities in Tina Pic, Kelly Benjamin, and Catherine Cheatley.  My pick here, however, will be for TIBCO's Brooke Miller (current US road and crit champ) to improve on last year's second place finish.