Piano stage today, partially in response (one would think) to the riders' distaste for the no-radios experiment. Too bad... it could have been a curious little stage. It also could have been another Bastille Day French escape. But it was none of the above, with a slow peloton chasing a slow breakaway. Some rumors of riders with radios, despite the ban -- possibly the only interesting event today. Results:

No changes to the overall, whatsoever[update] Apparently a small, late split cost a few guys 15 seconds, including Levi Leipheimer and Bradley Wiggins. Anyway... 1. Nocentini; 2. Bad Bert, at 6"; 3. Lance, at 8", etc. Nice ride by Hushovd, limiting Cavendish's gain to five points (35 for first, 30 for second), which is what Thor needs on these obvious Cavendish stages. Columbia, to their credit, seems to have forced some of the other sprint teams to pitch in with the work. Slow-mo sprint... kind of uphill, nothing doing once Cav hit the front. As BradBordeaux would say... "BAH!" 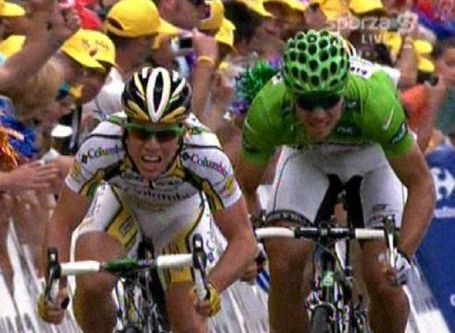