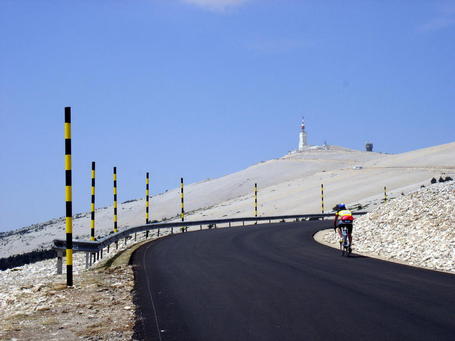 Finally... FINALLY! the Tour de France has launched itself skyward, where all our questions about life as we know it will be answered. Who will win the Tour? Which stage will be decisive? Who killed JFK? How do you program a VCR? This and many more important matters will all become clear. The Mountains will tell us.

Starting yesterday and over the next week the Tour will complete four legitimate and potentially decisive mountain stages. Where the big blows will be landed is as yet undetermined, but here is a guide to each of the mega-climbs, and an assessment of their potential impact, straight out of DS Little Bear's pediatrician's office. This might run a tad long, so... over to the jump please.

The rating scale we like to use to illustrate what climbing these beasts is like is the famous Wong-Baker pain scale:

A few words about "rating the climbs." First, the ratings applied are relative to the other climbs on the list. Fact is, everything hurts by the start of week 3 of the Tour, so it's a little obtuse to suggest otherwise. Info in this post was drawn in part from Gavia's work at Steephill.TV, while the links for each climb are to their detailed descriptions at Climbbybike.com. I started this on Saturday, and the first two climbs are in the book already, but I left them in for illustrative purposes. Details are all we have; though even the excellent km-by-km stuff at climbbybike tells less than the full story. One 8% km -- a steady 8% -- is not the same as another -- say, with a 16% ramp and a flat spot.

Where there are several approaches to a climb, I tried to figure out the right one, but you get what you pay for here. Still, that's not to make light of the issue of multiple routes to a climb. Just because you're on Famous Mountain X, doesn't mean you're riding like the Tour, if you're using a different approach. Only yesterday this point was driven home when I was trying to pack in some elevation gain over one of the area's more difficult climbs. Same mountain, but the north route climbed in about two miles, yo-yo-ing between 8 and 20% ramps, while the south route was more in the 5-11% range. Same mountain, but the two routes bore no resemblance to each other.

This climb -- the fifth of six on the day but coming after four pretty insignificant ascents -- starts with its worst grade, about 8% for one km, before leveling off to 4%, then kicking up to the 6% range for the bulk of the climb. In hindsight: I don't want to call it a speed bump, but if any of the GC crew were troubled by this climb, they did an appropriately solid job of concealing it.

No climb to an Alps Tour Stage finish line can score less than 3, simply because of the battle you can expect to unfold and the speed at which the climb will be ridden. Climbbybike calls it a 25km climb at 3.7%, but the Tour simply lops off the first 17km, all of which is under 4%. From there it's a slog over 12 switchbacks to the Verbier ski station. Not deadly, but definitely going to hurt. In hindsight: Totally underrated... plenty of guys got fried on that slope, at least by the speed of the ascent, which says the hill was hard enough to launch the race from.

No route details for this one, alas. The climbbybike stats all seem to catalog the opposite side, from Aosta in Italy, so no help there. I don't know that there are any horrific ramps on this climb; just a long, long slog, past several of the greatest ski resorts in Europe.

The worst of it is a mere 8.2%; mostly it's a long slow grind. I suppose you could see attacks with about 5km to go on the climb, where there's a brief respite followed by the 8.2% km -- a nice place for a desperate challenger to rest and accelerate prior to the finishing descent. Otherwise, the grade doesn't likely lend itself to many attacks; just slowly detatching people occasionally.

Today's queen stage sends the riders straight up from the opening gun, starting with the Cat-1 Roselend. The grades are pretty steady, it appears, and the maximum comes after about 10km, giving the peloton a chance to warm up. Might put Kenny van Hummel into early difficulty, but otherwise I would imagine the heads of state won't mind this as a way to get the legs warmed up. Presumably it won't be raced at top speed, or anything close.

In Gavia's preview she mentions that there aren't many flat spots in this stage. Well, from the looks of the map, this stage comes right after the descent off the Roselend, across a valley that's maybe six inches wide, before turning up again. Another long grind, mostly in the 6-7% range but with some 9% grades early and an 11% ramp about 10km up, just to be sure the mountain has your attention. [Warning: there's some disagreement between Gav's preview and what I gather is the right route, or at least the max grade. Might only be 8%. I'm open to correction, as always. In this case, it doesn't change the rating.]

Skipping the Côte d’Arâches (no côtes, just the cols!), the peloton reaches the Col de Romme after about 130km, where it's time to put on a serious hurt. Roughly half of this climb is between 10-12.5%, and the rest hovers in the 8% range, save for a brief pause in the middle. This may be the most decisive climb of the most decisive Alps stage, separated as it is from the final climb by a twisting descent. Those grades are more than enough to launch an attack, and to put some phenomenal athletes deep into the red.

The link shows the route from farther out, but if you read the detailed map you can start charting this climb from Le Reposoir. That would be the part where it turns up past 8% and never relents, nudging past 10% right at the summit. Very few switchbacks or changes in grade: just point that front wheel up toward the sun and start grinding. Very nearly merits our highest rating, coming at the end of the queen stage, though I think it's a coin flip as to whether this or the Romme will be worse.

This is the classic ascent, from the west, via Bedoin. Le Ventoux can also be approached from the due south and north, both of which are a bit more on-and-off though adding up to roughly similar distance and altitude. The west route, by comparison, is steady-on and unrelenting. As they put it at climbbybike:

The Mont Ventoux does not give you any rest until you reach the Chalet Renard. The climb never goes under 8% and there are long strokes of 10%+. Until you reach the chalet, where the climb gives you the opportunity to get some breath, or maybe even more if you opt for a little rest at the Chalet's terrace. Shame on you, cause we go further up, while it"s not even 7%... Not for too long, cause the climb gets harder again while reaching the top. You may consider yourself lucky if there is no wind trying to blow you from your saddle.

Charming. Unfortunately not even Kenny van Hummel can afford to pause at the Chalet. He and others might rejoice there in knowing that the longest, steepest slogs are behind them, but at some point I doubt a 7.5% ramp feels all that much easier than a 9% ramp did half an hour ago. And that's before you take into account the wind, which hits from the west side most directly, I believe. Have fun with that!