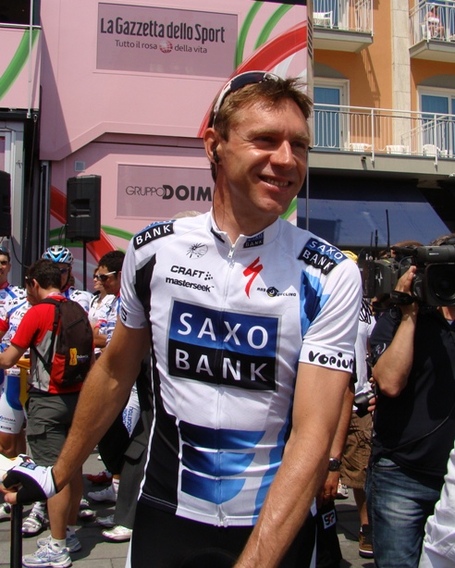 Most of the news of Jens! Voigt's condition sounds serious but recoverable -- he lost consciousness but was talking later; he didn't remember the crash, but he's awake; he's undergoing lots of scans to make sure. That said, our man Jens! suffered quite a knock today, and until we know for sure he is OK, a great many fans remain concerned. So here is an open thread for posting updates as they come in.

Presumably (but not certainly) L'Equipe should have up-to-date info. Here's their latest from talking to Saxo Bank DS Bjarne Riis:

The manager of Team Saxo Bank, Denmark's Bjarne Riis, did not hide his concern Tuesday evening, after the fall of his rider Jens Voigt in the descent of the Petit Saint-Bernard. "I've seen that after the accident and he looked very poorly," said 1996 Tour winner. It is too early to assess the severity of his injuries. I have not seen the fall, I did and saw after that was not good.

Also, as team websites go, the Saxo Bank site is pretty good with updates, so check there too. Otherwise, read the comments here, as many of our readers in Europe are getting info faster than appears in the English media and posting here. Thanks!

Hope he's got it right.