Animation on the GC Podium today as the climbers strutted their stuff. Tomorrow though, no team mates will pace you, no alliances will save you; one man enters, one man leaves (obviously it's not Thunderdome). The Annecy time trial is upon us.

Here in the capital of the Haute-Savoie we'll see round two of the three round GC slug fest. Today was round one with a smorgasbord of mountains. Tomorrow, round 2 with the individual time trial, and finally Saturday when anyone that has anything left in the tank, will sacrifice every last bit of their being to climb the standings by climbing Ventoux. High drama awaits!

My current hatred of Danilo Di Luca interrupts my usual banter with Gavia.

The crono course traces the lake in the city of Annecy. The course is mostly flat, interrupted by one category 3 climb. Annecy sits in the shadow of the Alps, just below the Col de la Forclaz. Run-off from the Alpine snows feeds the lake, which is known for its clarity, and a series of canals runs through the city. Annecy’s iconic landmark is the 12th century Palais de l'Isle, a grey stone fortress which sits in the middle of the canal du Thiou.

Annecy has hosted the Tour de France twice before this year’s edition. Both previous visits came during the 1959 Tour, when both a start and finish took place in the lake-side city. Rolf Graf won stage 19, which finished in Annecy, while Brian Robinson won the following stage which began there. Frederico Bahomontès wore the Yellow Jersey on both days, and celebrated overall victory in Paris that year. Bahomontès won the mountains classification six times at the Tour de France, though he only won the general classification once. Nicknamed the Eagle of Toledo, he also achieved the rare feat of winning the mountains jersey in all three of cycling’s grand tours.

Three quarters of the way around the course is the Cat.3 Côte de Bluffy, which builds 233m of elevation over it's 3.7km. That's a sharp and nasty 6% to have to manage all by yourself. The summit of the Côte de Bluffy also serves as the third time check on course.

In case you were wondering who Bluffy is... 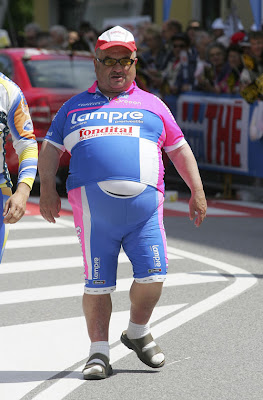 PodiumCafe member Mark T1979, has a fan post up with first hand pictures, accounts and pronouncements regarding the Annecy time trial route.  Have a look at it here.