Lance Armstrong inspires more words and a wider range of views than just about anyone in the world of sports. His incredible accomplishments in the Tour de France and elsewhere in cycling, set against the thoroughly dubious nature of the sport over which he towered, have sparked endless debate over his legacy: champion, doper, cancer survivor, hero, 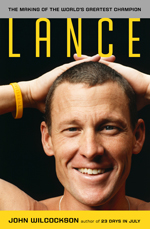 American icon, celebrity, water hog, and future president, to name a few. Naturally the media can't get enough of him, nor it seems can the publishing industry. First Lance wrote a book, then another, then his mom wrote one, then he let a journalist or two follow him around during a Tour for their books, then a few other journalists wrote more books that weren't quite as friendly, and finally his ex-wife cranked one out too (a friendly one, I am told).

Enter John Wilcockson into the fray. Wilcockson, the dean of American cycling journalism (sorry UK, he's ours now), has slowly been easing himself out of the day-to-day responsibilities of reporting and running publications like VeloNews -- or so I gather. But he became involved in the Armstrong comeback last year when Lance started kicking around the idea of returning to Wilcockson and other insiders, and after penning a dozen books Wilcockson apparently began to wonder whether there was more to be said. How can you cover a guy like Armstrong, about whom so much has been written and said over so long? What do you give the guy who has everything, media-wise?

Lance: The Making of the World's Greatest Champion is the ultimate word on Armstrong, or at least what we know through 2008 (might need updated editions soon). Unlike the books by Lance, this is a journalistic work, where the author offers varying perspectives, multiple sources, and even rebuttals to Lance's version of events at times. Unlike the outsider books, the author is never left guessing -- he has access to Lance, his friends, and his detractors all at once. Unlike the single-year works, including Daniel Coyle's excellent, edgy Lance Armstrong's War, this is a comprehensive examination of the subject, starting from Armstrong's birth and only stopping when the publishers came over and wrestled away the galleys. It includes a fair amount of unique information, like interviews with family members you tend not to hear from: Lance's aunt Debbie Glanville, whose close relationship with her sister Linda put her front and center in young Lance's life; or Lance's thoroughly estranged stepfather Terry Armstrong, an anguished, fallen character whom Lance treats dismissively when he mentions him at all.

The book fills in some significant gaps in the Armstrong story. Wilcockson covers Lance's early years as a competitive athlete, talking with high school classmates (like pro cyclist Chann McRae) and coaches to chart the timeline of an incredible prodigy of physical attribute and edgy ambition. It shares the experiences of his close cadre of friends as they see him caught in the grips of cancer -- which Wilcockson treats not with an air of excess drama but with fast-moving factual sequences: from poor results to what seemed like a death sentence overnight... to treatment and survival and the reshaping of his life... and quickly back to cycling. Lance has told the cancer story himself, from inside his head and heart, but it's interesting to see it more from the outside. With the benefit of further hindsight, it all seems to have come and gone very fast.

Wilcockson's telling comes off as balanced and forthright in dealing with Lance 2.0, megachampion. He reports on Armstrong's Tour victories from close up, both the glorious side as well as the downside of working with Lance -- the serious taskmaster, demanding boss, under pressure to win from (among other things) a $10 million bet with an insurance company. Wilcockson also tells as much of the doping story as he could, detailing all of the accusations and offering the official rebuttal points. Ultimately the book comes across as sticking up for Armstrong, as the author squashes each argument from the LA Confidentiel crowd, and I'll leave it to you to decide if that's OK or not. Ultimately, nobody has the goods on Armstrong, possibly because they don't exist, though I have long opined that the scourge of doping is the frustration of proving negatives and/or uncovering dark secrets.

If you want the answer to the doping question, you won't really find it here, though Wilcockson certainly portrays an athlete so smart and gifted as to be capable of beating the Ullrichs and Belokis on lettuce and mineral water. The argument is this: one-in-a-billion cardiovascular system; chip-on-his-shoulder personality which responds fiercely to any perceived betrayal; unbelievable confidence and competitive drive from day one; devotion to any technological innovation (such as laser therapy for recovery??) or team dynamic that will give him an edge; and a CEO's brain to manage and compartmentalize it all. It's pretty convincing. At least, if it's possible for anyone to have won clean in cycling's dirtiest era, Lance seems like the guy who could have done it. But who knows.

To be honest, I struggled with the idea of reading The Making of the World's Greatest Champion for two reasons. First, another Lance book, just as the Lance media tidal wave was washing over the sport, wasn't enticing... though it only took a chapter or two before I got that this was something original. Secondly, the title is a real disservice, either to the book or to cycling, possibly both. I thought "hagiography" when I saw it and might have skipped reading it, had I not promised Da Capo I'd do a review. Ultimately, Wilcockson never really uses "world's greatest champion" as much more than a cheap line -- he doesn't compare Lance to, say, Eddy Merckx (thank god) or to champions from other sports. One wonders if the line was forced on the author for marketing reasons, since it overstates the case Wilcockson actually makes in the book for Lance as a supernatural force. Pure speculation on my part. In any event, the title is a turnoff and the "WGC" should have been dropped.

Speaking of turnoffs, we have talked a lot about how fans react to Armstrong, and how much of it is tinged by the saturation coverage his life has received. The biggest argument against putting out this book is the availability of so much damn media chatter on Armstrong... and yet, ultimately, that's the argument for doing it. With luck, this book will blow most of the chatter out of the water and replace the fawning titles, the silly gossip, the searing accusations and the endless blow-by-blow accounts of how he trains a lot and rides fast with a single, coherent depiction of who the guy seems to be. Someday when my kids hear the name and think, "right, who was that guy really?" this is a book they can turn to for something like an actual journalistic account. Written for today, this book is awkwardly positioned against a noisy backdrop, but its merits are much more apparent if you picture Wilcockson recording history for the future.

[I will try to interview the author after the Tour, if I can.]