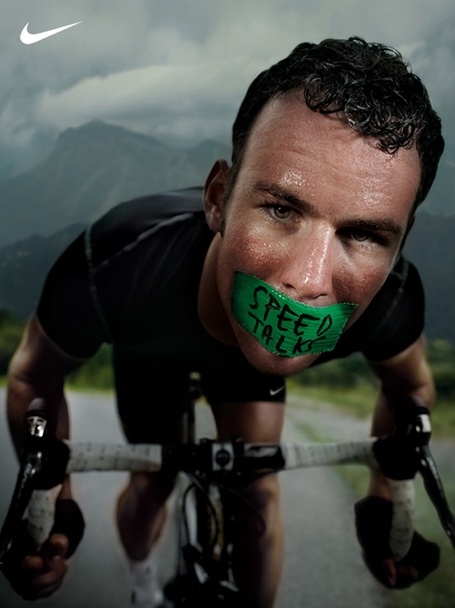 I'm not a huge proponent of running ad pics, but Nike sent this to me as a preview of their forthcoming promo campaign on Cavendish's behalf, at least in the U.K., and I thought it worth sharing. First, Nike generates some great images, with minimal emphasis on commercialism. And secondly... Nike is running a promo campaign on Mark Cavendish?

To the US audience -- and by this I mean the mass-market audience, which isn't quite the same as us hardcore fans -- Cavendish has a chance of catching on. Not a great one; being British is a benefit compared to other European nationalities but a far cry from American. But a chance. Nike are keying on his mouth, and his blazing speed, sort of a trash-talking Usain Bolt on wheels. Unfortunately for Cav, the void created by Lance Armstrong's retirement is currently being filled by... Lance Armstrong. But that's a temporary fix. I suspect to the British mass-market audience this could be rather huge. For the same reason Cav can't draw Americans in like Lance, I would assume Lance never quite lit up the U.K. the way Cav could.

As for Nike, I'm curious to see what they have in mind. Their forays into cycling have been disappointingly limited to following Lance around. That said, the sport gave them plenty of reasons to fade from the scene in the years 2005-8, so perhaps their campaign signals a new confidence in the sport. I don't want to jump to conclusions, but after the last decade new sponsors, particularly of this cachet, are a big deal. I love the "Green is my Yellow" tagline to the video on the flip. After a few decades of being force-fed the yellow jersey, these mass markets might need a little educating on what the maillot vert means, lest people start scoffing at how Cavendish hasn't won on Mont Ventoux.

As a Northwesterner, I can't also help but notice that Nike and Cavendish's primary sponsor, Columbia Sportswear, are neighbors in Portland, OR. I've written in the past about the strong identity cycling has carved out in Portland, so I note with much interest the harmonic convergence here, and make a big mental note to keep an eye on where this is going. Perhaps being the world's best team and rattling off 80 wins a year will get you some love from the U.S. of A. after all. OK, enough unanswerable questions from me. On the flip, an interview with Cav.