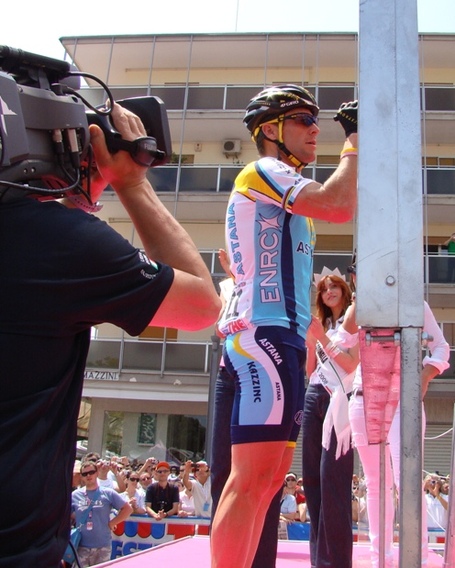 Nobody is more troubled by Lance 3.0 than me. As the operator of this website, the English-speaking world's most collegial forum for chatting and joking endlessly about cycling, the return of Lance Armstrong to the Tour de France represents the single biggest threat to our peaceful existence. Simply put, no rider in the modern era evokes such a wide range of opinions, and consequently disagreement. And sure enough, by the end of Saturday's opening stage (and three hours of TV coverage centered on Armstrong), the first accusation of "Lance-hating" had arrived in the comments. Time to set the record straight.

Two points, to get started:

With that, on the flip, I will attempt to summarize what I perceive to be the ways that people talk about and view Lance Armstrong here at the Cafe, with the hope that our usual freewheeling discussions can continue without anyone getting the wrong impression.

The bulk of the criticism directed toward Lance stems from the fact that the Versus Channel (a/k/a Vesus) is centering so much of their coverage around Armstrong. To the fans who follow the sport daily (OK, hourly), this is hard to stomach. I can speak for this group, I think, since it represents a lot of the Podium Cafe regulars along with myself. The sport is so much richer than the Tour and so much bigger than one rider that the all-Lance coverage starts looking like one big thumb in the eye of the other 179 riders... who also suffer unfathomably in preparation and who often have great stories of their own. LanceLanceLance... it's annoying, and it only gets worse.

To those fans who prefer that the spotlight stay on Armstrong, I'll say, in my opinion, that the reaction of the regulars to the Lance coverage is not hatred but frustration. And it's not particularly directed at Lance but at the media. If Lance were covered like anyone else, I suspect most diehard cycling fans would be delighted to have him back.

But to the harcore fans, a word of caution: it's not just Vesus. It's the entire sports establishment that is fixated on Lance's return. As Jered mentioned on Pez, you can't dismiss the fact that you need both hands to count his Tour wins on your fingers. And as commenter Yeehoo mentioned in the post-stage thread, from his/her personal experience being in Monaco Saturday, everyone at the Tour is following him. The Lance Effect is not just a media phenomenon. Whether it lasts when we get deeper into France is another matter.

Lance has undeniably sold a pretty decent sized chunk of the American public on cycling through his exploits, and while a number of these recent converts stuck around after Lance left, a certain percentage of American fans remain connected to the sport solely through the Tour, or even just through watching Armstrong at the Tour. I can only guess that for some it's a matter of other priorities -- not everyone can watch third-rate Belgian warmup races on Cycling.TV in March. Fair enough.

Still other fans are connected to Cycling and Armstrong because of cancer. I am lucky to say I don't belong to this group, but I can only guess that it's a powerful connection. And I can understand to a degree: his monetary contribution to cancer research is a far greater contribution to society than I could hope to make, and his inspiration to cancer sufferers and survivors is incalculable. To them he is a genuine hero, in a way many of the rest of us can really appreciate and which transcends mere sports fanhood. It really is about life and death.

To the Livestrong crowd, I ask you to separate the irritation outlined above from real distaste for Lance. I can't speak for anyone besides myself, but I consider him a true hero AND I want Vesus to shut up. These are not incompatible positions, in my eyes. I would also add, don't listen to everything Armstrong himself says on this score. I obviously don't know him, and suspect that to many he's a great guy, but by all accounts he is also hot-blooded, prone to overreacting to his critics. I don't think he should publicly obsess over "trolls" or tweet about "hater-tots," in part because he should rise above it, and in part because it sends a message to his fans that they should get confrontational too.

And to the year-round fans, please be mindful of Lance's public virtues and the passion he inspires in others. I tend to believe this isn't a problem: the hardcore fans here at the Cafe are generally quite welcoming of the Tour-only fans, even in disagreement, and the latter group will get a better sense of this as we hang out together this month.

A/k/a He Who Must Not Be Named... this is a reference not to Harry Potter but to doping. In hindsight, the era in which Armstrong rose to glory was awash in EPO. Watch the "Look Back" specials and you will see Lance dueling with a long list of convicted or admitted dopers: Rumsas, Vinokourov, Hamilton, Heras, Mayo, Basso, and Operacion Puerto characters of muddled culpability like Ullrich and Beloki. Lance's own culpability is the white whale for more than a few journalists, but to this day his legacy remains officially intact.

This subject is kind of a nightmare for the friendly confines of the Cafe. People have strong opinions about doping, and even stated respectfully they tend to provoke reactions. My own feeling is that unless you possess hard evidence of guilt or the ability to look within riders' souls, you should probably refrain from speculating about the fraudulent activity of distant strangers. If for no other reason, try to remember that accusations can have consequences, and as a lawyer I really don't want to hire a lawyer. In Lance's case the sensitivities are significantly dulled by the fact that it would be hard to level any charge that hasn't already appeared in several published books. So talking about Lance's past practices isn't so much irresponsible as it is pointless.

Which led to the Ban. Back when Armstrong was retired, I broke from my own philosophy of letting people be on the site and stated that the subject of what Lance took between three and eight years ago was no longer an appropriate subject for discussion at the Cafe. This was in late 2007, when the subject kept coming up and we were years past having anything new or useful to say about it. It just pissed everyone off. Of course, the unprecedented and heavy-handed ban inspired some ridicule, whereupon Lance became HWMNBN. A more accurate version was "he whose blood values must not be speculated about," but HWMNBN was far catchier. The ban was lifted when he returned to cycling, though I still fail to see any value whatsoever in discussing the subject, even as Armstrong himself bills his return as at least partially an exercise in vindication. So if you can't think of anything new and intriguing to say about Lance's past doping or lack thereof, I'd appreciate it if you could leave the subject alone.

All niceties aside, some people really do not like the guy. Every star has his detractors, and Lance is hardly the exception. It's the doping question, or it's his personality, or his Hollywood lifestyle, or god knows what. If any of this describes you, all I can say is that there really isn't any place for hating on guys here, Lance or others. The only exception is for newly discovered cheats, though even then most of the discussion could be summarized as "buh bye."

To put things in Cafe perspective, a few regulars have memorialized this distaste for Armstrong by creating ELPMO, a cuddly character whose name is derived from the acronym for "everything Lance pisses me off!" ELPMO is a friendly chap, as you can tell, and while people who see red every time Armstrong's face appears are entitled to their feelings, expressing them will likely get you nothing more than a wave from ELPMO.

What you won't get is engagement from the other readers, and I reserve the right to put a stop to discussions. It's almost a joke to say this, because we're in our fourth year and I am struggling to think of a time when this has happened, but that's the rule nonetheless.

OK, that's about enough. The Tour will give us lots of other subjects to discuss over the next three weeks, and if Contador stays upright I doubt Lance will really have that great an impact on the race. To me, strictly from a cycling perspective, he's about the tenth most interesting guy in Monaco at the moment, though that would change in a hurry if suddenly Bruyneel needed to put Lance in the leader's role. His comeback has some truly fascinating elements to it, but until he starts threatening to overtake his own teammates, it's all just backdrop to the real race. In fact, if Contador is unbeatable, and Lance makes good on his promise to be the world's best domestique, it may be the best thing that ever happened to Talking About Lance.