Q: How Do You Beat Cavendish? A: TRBWR

Share All sharing options for: Q: How Do You Beat Cavendish? A: TRBWR 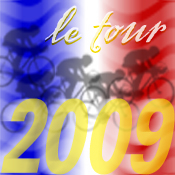 Seriously. What follows are fevered ruminations that if you will no doubt laugh at. But the purpose here is to think of a strategery that could deny Cavendish the Green Jersey.

Imagine you are a DS on one of the other teams. Pick any team: Quickstep or Skil Shimano or Cervelo or whoever. You have a rider or two who under normal circumstances is a contender for the Green Jersey and furthermore you've constructed the team with that goal at least partially in mind. You knew coming into the Tour that Cavendish and Columbia were the favorites but you thought you had a reasonable chance. But today's 2nd stage, well, that reasonable chance looks like it's rapidly going south. Drastic measures must be taken. But what can you do?

The first thing that pops into my head is never help Columbia chase down a break. Not one rider. Not once. No helping is permissible. In fact I'd have quiet discussions with other DS's about this since I don't want any other team helping out Columbia either. I want to weaken that train as much as possible before any bunch sprint. A side benefit to this is that Columbia would need to commit the likes of Rogers and Kirchen and Martin to chasing down breaks thus making them weaker for non-sprinting stages.

Not helping is a first step but it's not enough. Cavendish won't chase down anybody and he can grab my sprinter's wheel and win from there too. You've got better odds that way but he's still faster and he'll still win a bunch of points and still might capture the Green Jersey. You need to take away his points-but not in a Tonya Harding way.

Another effect of maintaining a moratorium on helping Columbia is that they will get totally pissed off and stop chasing. Great! That's one less stage that Cavendish doesn't get any points! But that's only half of a winning strategery. You want your riders to win points too. So you need to get in as many breaks as possible.  Every day, including non-flat stage days.

Now if you do this you won't be able to send out your #1 sprinter on every break, expecting him to stay ahead of the peloton and thus grab sprinter points. That would be as bad for other teams as allowing Cavendish and Columbia to dominate and it won't be allowed. So you will need to send out different riders all the time, every stage, and whoever sticks, great. You want to make the Green jersey prize be a total free-for-all with non-sprinters in the running too. You just want to break the strength of the Columbia train and Cavendish.  You want to turn this competition into a "Third-Rate Belgian Warmup Race" or TRBWR  where the field is wide open. If you are Cervelo you are happy with Klier getting points and Haussler and Hushovd being aggressive. No more siting in the pack waiting for the final sprint. TRBWR. Rabobank? Hey a Fletcha win is okay with you. Clement is fine too. Kuschynski is just begging for this type of race from Liquigas. Fine. Vogondy or any Feillu or Terpstra or whoever. Great. The more anarchic the better. And don't chase the break. Change the rules of engagement. TRBWR.

Just two rules apply: 1) No GC contenders. 2) No Columbia train with Cavendish. Columbia can send out other riders into the break. I'd even invite Saxo to send someone tomorrow that would take over the yellow jersey if the break succeeds just to get things started. Say Stuart O'Grady-and make sure the other guys on the break have a worse time then him so he'll get the yellow if the peloton and Cancellara fail to get close enough because you don't care about the Yellow Jersey on the flat roads.

Yeah I know: crazy.  Injecting how races play out in Belgium in March is just not done you say. Why not? What would you suggest? Or are you saying it's not possible to change how flat stages play out?