The dramatic phase of this Tour de France got an early start when today's seemingly innocuous stage was split apart by crosswinds and some aggressive riding by team Columbia - HTC, who placed all nine of their guys in the 27-man split and hammered it all the way home. Ultimately the effect of this stage may be minimal, as the gap at the end was maybe 41 seconds, hardly enough to worry guys like Alberto Contador in a three-week race. But the stage may be memorable for one reason: the elevation of one Lance Armstrong from tenth (and fourth on his own team) to third, and on the verge of a yellow jersey after tomorrow's team time trial. Lance has gone from looking at support riding to making a far stronger case for riding for himself. This could get truly explosive... Results:

And the big story, the General Classification:

Hincapie in the post-stage: "nobody wanted to race." So they put the hammer down: 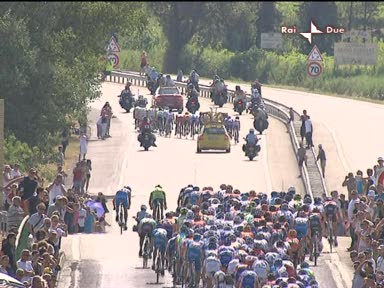