I won't likely do one of these every day, and will in fact gladly share the duty with other willing participants, but I am more than a little keyed up after today's events, so here goes.

This is being dissected thoroughly in today's post-stage thread, so I will simply say that he is back in the conversation. Likely to win? No, still a longshot. But til now Astana's team organization seemingly consisted of "Alberto Contador is our leader until we can't ignore Lance anymore," a strategy that could have worked after Contador's impressive stage 1 time trial, had he then made up more time in the early mountains. The team might have made it to Paris in cohesion, united behind a dominant young champion. But now... seeing Lance and Popovych pulling in the break can only mean that Astana are racing as two teams. This isn't bad or evil or even stupid, IMHO: it's simply the reality of having a former winner on staff, and the occasional need for a team to hedge its bets early on. It might even make Lance into the ultimate decoy, capable of throwing Saxo Bank into panic next time he attacks, while Contador sits back and relaxes. As for Contador, like every young champion who ever had to ride with an older former-Tour-winning teammate, he needs to smile and keep his nerve.

I've been calling them the Everyday Boys for their ability to win about five races a week. But after today's fit of pique at the lack of racing by other teams, and Columbia's response consisting of stomping their entire squad off the front of the race, for good, I have a better name for them: the Patrons of the Plains.

Some B-list GC hopes just got dragged off the scrap heap, at least for now. Monfort and Rogers now give Columbia a GC rider who's nearly level with Contador again, while Kirchen (a minute further back) has mitigated a bit of Saturday's damages. Gerdemann, meanwhile, seemed to know better than to lose sight of his former teammates when they get that gleam in their eye and start massing at the front. Smart riding!

Less than a week into their sponsorship of a cycling team, and this is what they get for their reward? 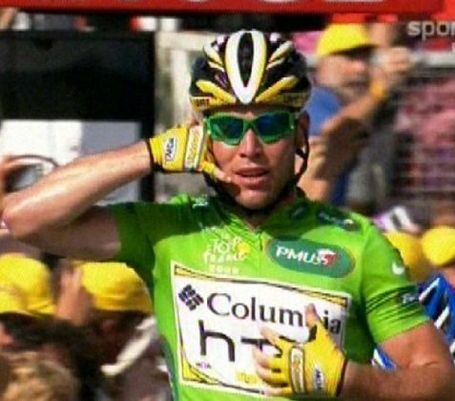 Are you kidding me? Invest in cycling, folks. [Hey -- Cofidis need a sponsor still!]

Having Lance up in the break strengthens JB's hand in the race, no doubt. But his job just got about 250% harder...

2. Every sprinter except Cavendish and Hushovd

[I had to add a few words, but throughout the Tour you can follow the Green Jersey daily battle by reading JSallee00's Pursuit of Green updates, in Fanposts.]

Missing a sprint when the green jersey is up the road (winning, no less) is FATAL to your points comp hopes. Cavendish is both lucky and good, being the fastest man on the best team. But of the rest only Thor Hushovd showed the focus a green jersey contender needs to bring, every day (save for the mountains and time trials). If Hushovd keeps this up, he will almost certainly bring home the green were something to happen to Cav. Farrar, Feillu, Ciolek, Boonen, etc. are all in a 40-70 point hole. That's devastating. Tourbecco says: "Happy stage hunting, Tommeke!"

That's about it. Hopefully some of the other teams will get the message that they can't sit back waiting for Columbia to escort them around France. I think we're all grateful not only for a little Lance intrigue, but for a little show of aggression as well. There are a lot of flat stages in this race, but we're nowhere close to seeing things get dull. Not by a longshot.