The US Scene: Vintage Italy in Boulder

Share All sharing options for: The US Scene: Vintage Italy in Boulder 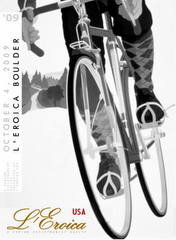 You have probably already seen the VN piece about Lance Armstrong plotting to revive professional stage racing in Colorado along the lines of the old Coors Classic. That's all well and good, but it's hardly the only -- or most realistic -- aspect of the sport's revival in and around its Colorado roots. That would be L'Eroica Boulder, a one-day cyclotourist "rallye" around Boulder, CO, in the fashion of the original L'Eroica in Tuscany, run on the same day.

First, some background. Yes, there's Monte Paschi Eroica Strade Bianche, a top-level pro race run in March and known to attract a top-class field. The race is a visual feast, running in part on white-stone gravel roads in the low Chianti region hills. In only its third year of existence, the race already sports an honor roll of Kolobnev, Cancellara and Lovkvist, and with its early March date it promises to remain a fixture of the early classics season.

But that race only came into existence because of L'Eroica, the October event that started in 1997. This is a cyclotourist event, run on the same Tuscan roads, but not an ordinary "race." From the rallye website:

It proposes surroundings and scenes from the "heroic" times of cycling: dust or mud, no organized service, vintage refreshments, wonderful and demanding roads, great ability to adapt and to suffer.

Riders haul out old wool jerseys, antique bikes, and inner tubes to strap over their shoulders (sniff... just like Girbecco...). They swig beverages from straw-wrapped bottles and tackle roads meant for the occasional car and a lot of horse-drawn wagons. Honestly, this couldn't be more awesome. I get the sense that "cyclotourist rallye" really means it's not a race, though inevitably I'm sure plenty of people treat it like one anyway.

Now comes the Boulder version, in tribute to the original Eroica as well as to cycling traditions, Italian ones in particular. Period costumes and equipment are highly encouraged (though not required, for obvious reasons). Gravel roads are in order, and power bars will be replaced by aged cheeses, antipasti, craft breads, fruits, traditional hams and Italian wine. Back in Boulder, there's an expo and swap meet for vintage gear, and the Boulder Theater will show The Bicycle Thief and Il Postino. Read all about it here. I am sorely tempted to trek in for this... stay tuned. Oh, and this is a first-time event, so spread the news.