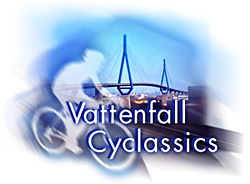 Welcome to the sprint event of the year! What's that, you say? Oh, sure, those Tour stages were important, or so we told ourselves at the time, lest we let our impatience for the Alps go unchecked. And yeah, Milano-Sanremo is by far the most important single-day event that tends to involve a bunch gallop to the line. And sure, the Vattenfall Cyclassic has been rearranged to include some climbing (Now! With 20% More Suffering!!), and I don't just mean the bridge in Veloki's lovely new graphic. But I still smell a sprint coming, and it's gonna be a whopper. Why, and who it favors, on the flip.

First, the prerequisites for a great sprint...

Rule No. 1: No Mark Cavendish!

More or less speaks for itself. Anyway, that appears to be a go, according to the Cycling Fever startlist as well as the official site. Columbia's website is uninformative... it's a tad strange, considering Cavendish's history in Germany (he's won much there, including the Sparkasse Giro two weeks ago) and the race's prominence, but apparently his programme has taken him elsewhere.

Um, sure. Probably. Hey, if past winners are any indication, Robbie McEwen is the defending champ, beating Mark Renshaw and Allan Davis to the line last year. And the honor roll further includes Erik Zabel, Oscar Freire and Stuart O'Grady v1.0. Some caveats: I can't tell from the official site if the final KM has been beefed up, so there's that. And some other winners include Alessandro Ballan, Pippo Pozzato and Paolo Bettini, though none of these guys are allergic to a fast finish. And, well, sometimes the peloton falls asleep. But a bunch finish is a decent bet, particularly with Columbia-HTC patrolling the front.

Rule No. 3: Some sprinters please?

I dunno, I just have a feeling here. Andre Greipel is the bigger name, but Davis is just returning to form after a pretty long layoff, while Greipel has been at it for the last few weeks. Tough call.

If CQ is to be believed, this would be the German's first-ever participation. In Germany's preeminent one-day sprinty classic. Whuh? Greipel actually makes a living winning stages of minor tours, and has no track record to speak of in the one-day races, save for some smaller home races and Philly Int'l this summer. In fact, of the Columbians, perhaps a better bet is...

Dude is just flying these days, fueled in part by the imminent, massive payday that his agent is cooking up for him as we speak. OK, those two wins in Poland can't be rated too highly, but riders make the race, and often a hot hand like the uber-talented Norwegian is a pretty solid bet. As long as he's not working for Greipel, or Renshaw. Confusing... let's move along.

Another guy riding well, when he's been riding. Second only to Cavendish at the Sparkassen Giro, after some very nice strides in the Tour. Setting aside expectations (which are a tad high), the kid's coming along fine. He has also had a few cracks at the race before, finishing as high as third in his flashy 2007 season. Someday Ciolek, a solid all-round rider, is going to win this thing.

Of the guys who've been idling since the Tour, I'll take the Wenatchee Wonderboy over Boonen, Bennati, Renshaw, etc. Not a solid bet to win, but if he finds himself in position in the last 200 meters, on a good day, he's the fastest guy in the race.

And a few other names to watch:

First, Pippo Pozzato... Cycling Fever thinks he's coming, but doesn't assign him a dossard, so...? Anyway, there are always a few classics studs around you can't dismiss, starting with Marcus Burghardt. He missed the Tour, but has plenty of recent race miles in his legs at the moment, so he should be fresh and ready. I am not really buying starts like Cancellara or Philippe Gilbert, guys who are probably using the race to kick off the last phase of their season. Fabu, for one, is almost certainly thinking about Mendrisio, and Gilbert, if he isn't, should be. I wouldn't sleep on Sebastian Langeveld, who's going well (two wins in the Sachsen Tour and 12th at San Seb), and is the kind of hammerhead who should like this course. [Ditto for Terpstra and Maaskant? Ah, nope. Not coming off the Tour.] And with that, I am out of wild guesses.