Welcome to this week's edition of the Wednesday Session. Is it really Wednesday already? Impossible. This week we talk about bike races. And more transfers. And yes, we even draw with crayons. The Wednesday Session is full-service, super deluxe, and whatnot.

There appears to be a great deal of bike racing going on at the moment. Francisco Mancebo won today's stage of the Tour of Utah and took over the race lead. Francisco... who?

Farrar en Fuego. Meanwhile, in Benelux, a country not found on my map, Tyler Farrar took the win in a chaotic sprint at the Eneco Tour and now wears the jersey of race leader. Farrar who also won last weekend's German one day classic, Vattenfall Cyclassics. That Farrar, so hot right now. The Garmin-Slipstream rider will also race the upcoming Vuelta a España, where he will hope to win his first ever grand tour stage.

Moving on to France, Samuel Dumoulin won today's stage of the Tour du Limousin and will rock the leader's jersey tomorrow, while in Italy, Giovanni Visconti of ISD-Neri took a rare race win at the Coppa Ugo Agostoni. The Coppa is one of the three races which comprise the Trittico Lombardia. Mauro Santambrogio of Lampre-Ngc finished second by a matter of centimeters. Santambrogio won't be too sad with that result, since he won yesterday's Tre Valli Varesine, which is, you guessed it, or maybe you didn't, the first race in the Trittico Lombardia. Santambrogio fun fact! The Lampre-Ngc rider has a tattoo on his bicep which reads: "I carry Jesus within me, no one will be against me."

On the subject of Italy, Franco Ballerini is busily plotting and scheming. Ballerini, as you may recall, is the lucky devil responsible for putting together the Italian National team for Worlds. I use lucky in the loosest possible sense of the word here. Ballerini believes that this year's worlds course with its constant climbing and descending will be very difficult to control. In a recent interview, he called it the "hardest course I've seen since 2001." The Mendrisio course has more more climbing per lap and shorter laps than last year's course in Varese. Ballerini believes that a conventional team set-up with one leader and several support riders may not prove ideal. He refused to name any names, but said he will try to construct a team with several strong riders. Alessandro Ballan, Damiano Cunego, and Vincenzo Nibali are all likely to receive the nod. Filippo Pozzato, the new Italian National Champion, may not. "He continues to talk, but does not show anything," said Ballerini of Pozzato. Is it me, or did Ballerini just call Pozzato a poser?

Zombie alert! Liberty Seguros wants to return to the pro ranks. Where's my De Lorean? I need to get back to the future! Actually, this Liberty Seguros is a completely different team than the old Liberty Seguros, which dissolved after the Fat Man was caught in the Cafe with the Bag of Money and the Thermos of Blood. Registered in Portugal, the Liberty-Seguros amateur team has celebrated 22 victories this season, including the recent Tour of Portugal, and has a roster of 16 riders. Americo Silva, the team manager, dreams of seeing his team ride the Vuelta a España and hopes to secure a ProContinental license next season.

Staying in Spain for a moment, Carlos Sastre will not ride the upcoming Vuelta a España. The Cervélo TestTeam rider raced both the Giro d'Italia and the Tour de France and has decided two is enough when it comes to grand tours. José Angel Gomez Marchante will take over the responsibility of leading the team for the Spanish grand tour, which actually starts in the Netherlands.

Good thing about all that bike racing, because we all needed a break from the silly season speculation. Wait... we did? Certainly Team Astana seems to think so. The Kazakh-sponsored team declared in a press release last week that Alberto Contador was totally absolutely positively not going to a new team next year. "A transfer is not negotiable and we will honor the signed contract," declared the team's press release. The press release temporarily quieted the headlines connecting Contador with Caisse d'Épargne and Quick-Step. Still, it's hard to escape the feeling that Astana doth protesteth too mucheth.

Alessandro Petacchi is not happy with his LPR-Brakes team. Not, not, not. The Italian sprinter wants to ride More Important Races, and is presently shopping for a Team Upgrade, which is something like a Girlfriend Upgrade, only different. Anyway, according to Gazzetta dello Sport, Petacchi is currently negotiating with Lampre-Ngc, though it's unclear exactly what stage those negotiations have reached. Team manager at LPR-Brakes Fabio Bordonali, meanwhile, needs the Sponsor Upgrade, as reportedly LPR will stop its sponsorship at the end of this season.

In other transfer news, Levi Leipheimer will reportedly ride next season for Lance Armstrong's new team, The Shack. Rumor has it that the team has signed twelve riders for next season so far. That just leaves about ten more to go. Up-and-coming U23 rider Taylor Phinney likely will not be joining the new team, because he prefers to remain in the amateur ranks for an additional season. Phinney won the U23 edition of Paris-Roubaix this year. The American will skip the Tour de l'Avenir, though, as he does not feel ready for the competitive stage race.

So, we've all heard about the new Shack branding. The Shack is a Hug. Actually, allow me to correct myself. After riding by my friendly (well, I assume they are friendly, I can't say I've ever put it to the test) neighborhood Ra.. er Shack, I discovered that the Shack is not only a Hug, it is a Big Hug. My apologies for the error. I would hate to mislead my loyal readers in any way. Well, as I rode along, I got to thinking about What The Shack Means To Me. Because really, I have nothing better to do while riding my bike. Anyway, this very difficult question sent me on a desperate search for just the right way to communicate my feelings. After much serious thought, I had the following vision: 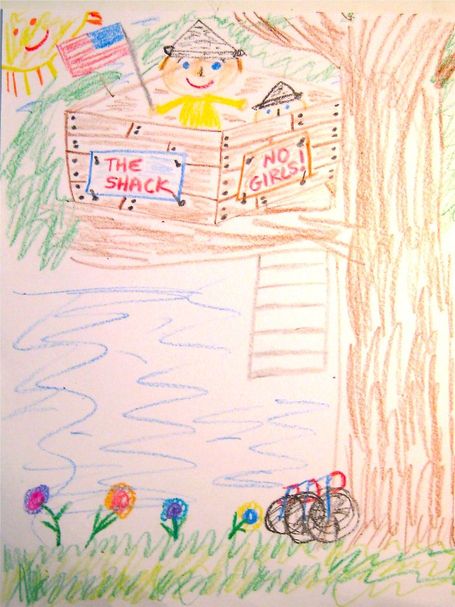 And that is the end of this week's Wednesday Session. B'bye now...

With thanks - or apologies - to the good people at NY Velocity for the unauthorized appropriation of their Levi joke. Really, I couldn't resist.