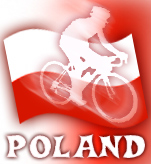 Not to hijack the live thread, but since the Tour de Pologne is heating up, it's time for some post-race fora. Today was a big day:

Sounds like video has been hard to come by, so special thanks to UMWolverine, Gryzdlu, rbjhan, Majope and others running the live threads. Here are some photos from a local mag.