Meanwhile in Mendrisio... Can Cance Be Stopped?

Share All sharing options for: Meanwhile in Mendrisio... Can Cance Be Stopped?

All eyes in the Men's Elite Time Trial World Championships will be on one man tomorrow. One man who needs no introduction -- not to the locals in the streets of Ticino Canton, not to any of you, not to anyone in the world of cycling... hell, not even to the millions of people who only watch the Tour. Fabian Cancellara is an overwhelming, unstoppable favorite to win back his rainbow stripes tomorrow in front of his adoring home fans. But it ain't over til it's over, so let's at least try to imagine why it's possible for someone else to win. This might take a moment. On the flip?

The elite men do three circuits on this course, totalling 49.8km, putting this on par (length-wise) with a Tour de France time trial. While the road race is being touted for its climby-ness, the ITT is a different route, and story: 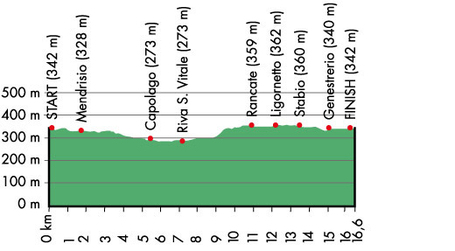 One little kick up at 9km, but otherwise even the profile can't make this course look hilly. As for the technical aspects, the course is so non-technical it's almost comical: 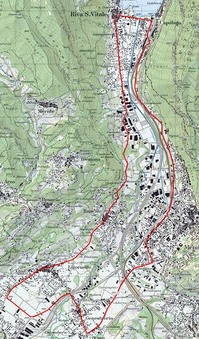 A river valley out and back. That explains the flat profile. Count 'em: five left turns and one right per lap. That's it. Assuming those inclines are modest grades, this is a pure power course. And a long one. Gee, I wonder who that was designed for? [Also, is it me or does that course look almost exactly like the map of Vietnam?]

Perhaps the biggest obstacle to Cancellara's impending success is his own ambition, particularly w/r/t Sunday's road race. Sure, it would be cool to win the world crono title in front of the home fans, but it would be ZOMG!*#! cool to win the road race in Switzerland, and Cancellara thinks he has a chance. He has made it clear that he wants both the bird in hand and the two in the bush, as it were, though how he intends to do this is his little secret. Will he back off at all on the crono to save a little extra for the road race? Is he sandbagging about one or the other events? Or will he just kill it tomorrow and hope his training has him back in top form by Sunday? Cancellara has given interviews about the subject, but if you've been around the sport for more than ten minutes you know that the last place you'll ever get any useful information is from the cyclist himself, before the race. So stay tuned.

Question 2: Who has beaten him before?

[For some background, I did a comprehensive analysis of the world's best cronoman back in May. That plus 87 comments should fill in some of the particulars.]

Cancellara doesn't win every time he starts a crono, despite what it may seem. However, to the extent past results are a predictor, there is pretty much nobody at this race who has beaten him in a comparably long, flat race. He lost in the final Tour ITT to Alberto Contador (aside: wtf?), he finished 12th in the final ITT at the 2007 Tour, won by Levi Leipheimer. Neither is here; nor are Cuddles Evans (not in the ITT anyway) or Dave Zabriskie. Cancellara has lost some long ITTs that were too hilly, and some shorter ones for whatever reason. But then there's this: he has not lost at the worlds since 2005, or the Olympics since 2004, or the Swiss Nats since 2001. He has won nine of his last twelve events where a time trial kicked off a stage race, losing only two prologues and a Catalunya ITT. In other words, give him a stand-alone crono, not sandwiched between mountain stages, and he's virtually unbeatable.

Question 3: Who has the next best track record?

Past history is very important in one respect: the worlds tend to draw a somewhat slimmed down field, simply because not everyone who can nail a time trial is willing to hold their form into late September. Levi Leipheimer got some ink from me as the best complete cronoman of the era (since he wins on a variety of terrain) but he usually declines his annual invitation, last year being a rare exception. The best of the rest is arguably Gustav Erik Larsson, Cancellara's Saxo Bank teammate. Larsson has been fourth, fifth, 15th and 25th in his past efforts, as well as taking the Silver Medal in the Beijing Olympics (a very relevant data point). If you believe in trade team conspiracies, you might consider whether Riis has talked to Cance about dumping the ITT to Larsson and going all out for the road race. Fabu is a great teammate, and if he could be guaranteed the result I bet he'd make that deal. But Larsson will only be a minute up the road (to start), so Cancellara won't know til late in the game whether Goose is on a winning ride. And then there's the Who's Who mob of guys elbowing him in the finale Sunday...

Am I dissing the reigning champ Bert Grabsch? He has a win and a fourth in two efforts at the worlds. I like Bert Grabsch. But he hasn't had a spirited defense of the arc-en-ciel, he's no spring chicken, and he simply hasn't ridden too many of these events. I dunno what to make of him: part of his handicap in terms of appearances is the fact that he's German, and there are a limited number of slots per team. The Olympic race didn't suit him but his two worlds appearances did. Still, this course is a bit long, so I'll slot Larsson ahead. Incidentally, in head-to-head competition, the Larsson-Grabsch record is a dead heat, 8-8. So flip your own coin, I guess.

Two other usual suspects to slot in here: Bradley Wiggins and Svein Tuft. Two more products of the Garmin Cronoman Factory, both have some intriguing palmares against the watch. Tuft took second in the worlds last year, while Wiggo is a regular ace, including at the longer Tour distances. I am dismissing Tuft for now; his Vuelta effort wasn't good, suggesting that he might be overcooked at the moment. After his first year in Europe, a medal is just way too much to expect. Maybe next year. Wiggo, however, is a serious threat. He won his last crono, the British championships, and got a little warmup at the Tour of Britain last week. Not exactly on fire, but definitely a guy to watch.

Question 4: Who's ready to join the fraternity of elite Cronomen?

And then there are the kids. For starters, there's about half of the Columbia-HTC roster: Tony Martin, Edvald Boasson Hagen, and Frantisek Rabon. EBH figures to be holding back for Sunday, when he will likely win the first of many world championships (you think I'm kidding?), so I doubt he'll be at his top form. Martin and Rabon, however, have no such ambitions, and can be counted on for big efforts. Martin is sensational, but has no big wins to his name in the ITT, just some near misses. Rabon has won a couple national titles and some shorter events like the Romandie prologue, but that doesn't augur too well for this event. Ditto for Jani Brajkovic and Lars Boom. The latter is sitting on some late-season form, though, so if anyone is going to spring a surprise on the older guys it's the Large Bomb. Still, the Worlds aren't usually too kind to the young'uns, so I'll tamp down my excitement for now.

Mendrisibecco says: Unless you're Swiss or have other reasons for admiring Fabian Cancellara, tomorrow will not be especially memorable.