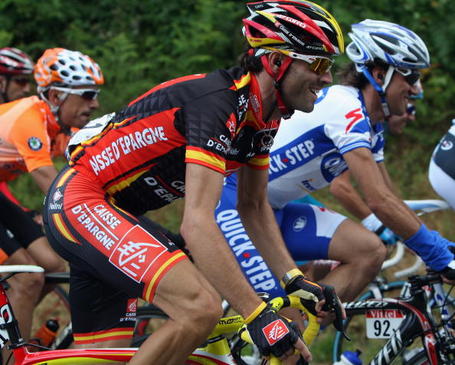 The sports arbitration court (CAS-TAS) will convene a hearing tomorrow in Lausanne on the Valverde case. This hearing will address the question of the Italian anti-doping authority's competence to sanction Valverde, who is licensed in Spain. The Italians assert that they have authority, because Valverde raced in Italy during the time of the alleged offenses. Valverde, with the backing of the Spanish Cycling Federation, claims that the Italian authorities have no standing to sanction him. The court will hear testimony from 19 witnesses, including officials from the Italian police and the Guardia Civile, the Spanish agency who first investigated the Puerto case. No word on how long the deliberations in the case should last.

Update, Tuesday. Gazzetta dello Sport reports that the arbitration court met today for a lengthy hearing that included testimony from Ettore Torri of CONI, Enrique Bastida of the Guardia Civile in Spain, lawyers for the UCI, lawyers for Valverde, and Tiziana Sansolini, an expert in hemotology who examined the blood bag linked to Valverde. Gazzetta reports that the court seeks first to establish that the sanction against Valverde is consistent with Italian laws and anti-doping regulations.

The legality of Italy's use of the evidence from the Spanish Operation Puerto investigation lies at the center of the dispute. The Spanish Federation and Valverde's lawyers have asserted that the Italian investigation used the material illegally. Not surprisingly, Torri disagrees. According to Italy's anti-doping chief, the Spanish transferred evidence pertaining to the cases of Ivan Basso and Michele Scarponi. How can Alejandro Valverde be any different? "The law must be equal for all," asserted Torri during today's hearing.

The outcome of this case will decide whether Italy's two year sanction against Valverde is valid. If the ban is valid, it is likely that the UCI and WADA will act to extend the ban worldwide, which would prevent Valverde from racing this season. The court is expected to offer a decision in the case on Thursday.