Share All sharing options for: Previewing Team HTC-Columbia: The Next Great Project 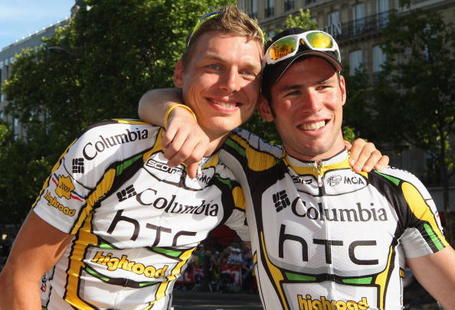 First, permit me a brief, tortured, and somewhat personal metaphor. If you don't like metaphors, skip down a paragraph.

The spring rains in the Cascade Mountains start slowly at first: each week from, oh, mid-February, the snow line rises a little higher. Eventually the rain encroaches on the Cascade snow fields, the storage of a region's water, the melting of which unleashes spring freshets that come barreling down the Columbia Gorge, cleansing the watershed and delivering millions (OK, thousands) of young salmon to the marine phase of their life. The cycle doesn't repeat itself in full ferocity every year, but you generally don't have to wait much longer than that.

OK, you can stop cringing now... but while this whole concept of renewal and the deliverance of youth is not unique to Team HTC-Columbia, nobody seems to take it to quite the same extreme. For the second time since Bob Stapleton segued into control of the team from the old T-Mobile regime, Columbia are embarking on a rather widespread and impressive youth movement. Even here, HTC-Columbia aren't alone: Rabobank and the Shack have well-known connections to youth development programs; Garmin are pretty diligent in their quest for young talent; and no doubt others are similarly oriented. But no established team has cleaned house -- willingly or not -- like Columbia has.

Here's a rundown of the turnover at Team High Road in the Stapleton era:

The first restructuring was deliberate. The sport was teetering on the brink of calamity, and Stapleton re-branded the old, corrupt Mob into a new model of integrity and rebirth. Not so sure this restructuring was quite so planned. Much of it had to do with contracts expiring and -- not unlike other sports -- teams lining up to grab what they can off the reigning champions. Dynasties are never easy...

In between the 2006 and 2009 restructurings, Columbia experienced normal turnover, but these years are bookended by remarkable hauls of young talent. The first such haul led to the Columbia juggernaut that won 160 races in its last two seasons. In 2010, though Columbia retain their top two winners, Cavendish and Andre Greipel, they have lost much of their classics teams as well as their few scant stage-race hopes. The holdovers after Greipel and Cav are still talented, but not explosive (e.g., Eisel, Monfort, etc.). So make no mistake: no matter how many bunch sprints they win, 2010 is a rebuilding year. Still, if the last project was any indication, and with exciting kids like Jan Ghyselinck, Leigh Howard, Teejay Van Garderen and Rasmus Guldhammer heading the latest Generation Stapleton, it should be fascinating to watch.

Cavendish, Greipel and Tony Martin. This team's currency is wins, not CQ or UCI points, and Cav and Greipel were #s 1 and 2 in the world victory rankings last year. Don't expect any changes? Well, Cavendish would love to branch out a bit (green jersey? more classics?), and with a bit more health luck Greipel could register even more wins. He's been sensational two years running now.

The key to a great season is Martin, a legitimate stage-race threat who rode a feisty Tour de Suisse (second overall) and exhibited the dual time-trialing and climbing skills every Tour de France contender yearns for. He was third in the Worlds ITT with two top-tens and 11th at the Tour cronos. And although he was allowed up the road, placing second on Mont Ventoux was an unforgettable result for the 24-year-old Cottbus'er. Of course, he will spend 2010 dealing with expectations heaped on him, so practice patience here. But Columbia are stocked with competent stage racers, and good things do seem to be coming his way.

Peter Velits. Toiling at Milram with minimal assistance save for his twin brother Martin (also jumping to HTC), the former U23 World Champion showed across-the-board improvement in sort of the Kim Kirchen role: posing as a stage racer but really looking at his best in the classics or in stage attacks. His lone win on the big stage was at the GP Kanton Argau, where he and Ben Hermans snuck away from Haussler, Hushovd and others in the finale, but he showed his all-round skills with an impressive 7th in Monte Paschi Eroica,10th at Milano-Sanremo, and fourth in San Sebastian. I don't know if he's got quite the climbing hops for the Ardennes just yet; Amstel Gold might be a more reachable goal in 2010. But he was top ten on three Tour de France stages, a skill prized on teams like HTC who probably aren't competing for Yellow.

Where they will Rise Up:

Nearly all of the world's more lucrative bunch sprints. This is news?

At the grand tours. I dunno, I want to see Martin put it all together for a run at the top five at the Tour -- and so far Columbia have been heavily oriented around the Tour -- but he might be better served by making a run at the Giro.

Are they still Germany's team? Old loyalty habits can be hard to break in sports, even when your team packs up and moves. Also, HTC host the country's most prolific winner (Greip) and most interesting hopeful (T-Mart). Sehr gut, nicht?

One hundred sixty-four wins in two years. If you hadn't already digested that stat by now, you should. Whatever they become from here on out, Team Columbia 1.0 were an astounding success. By redeveloping more with young climbers, HTC-Columbia are taking a step back and embarking on a much slower-baking project. So not only might 2010 be a little less joyful, 2011 might not be much different. The rest of the pack will be glad to see them again... and won't show them much pity, just as Columbia offered little quarter to the peloton for the last two seasons.