Share All sharing options for: Raise the Curtain, Mate! 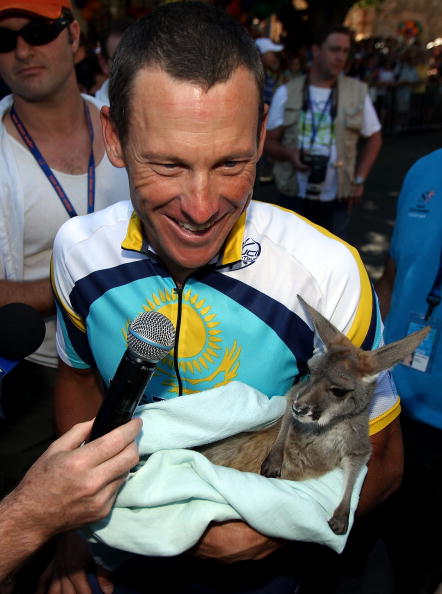 It's Santos Tour Down Under time! [The STDU... where have I almost seen that acronym before??? Wait, never mind...]

Has the long (nearly 10 weeks) winter of no cycling made you feel like you've got Roos in the Paddock? Well, fret no more, because folks, starting tomorrow, we've got real live bike races. Yes, it's the Santos Tour Down Under, the Pro Tour kickoff event and southern hemisphere sprintfest, running from Sunday (Saturday here) until the following Saturday/Sunday around Adelaide. Some things to know:

Sunday is the Cancer Council Helpline Classic, a one-off race around Adelaide on a 2km circuit. The race doesn't count toward the overall of the TdU, but it does function as a preview of TdU stage 6.

The TdU then kicks off on Tuesday (a/k/a Monday... I'll stop now), with a rolling road stage to a probable sprint. This describes the first three stages, in all likelihood, barring the inevitable breakaways. Stage 4 has a tricky finish in Goolwa, which could dislodge the usual sprint crowd. Stage 5 employs Willunga Hill twice, late in the game, in another attempt to scramble the sprinters. It hasn't worked much, but full credit for trying.

This race ordinarily favors sprinters and Australians. The sprinters include:

This race is a nice enough way to start the season and a good palmare for someone, but why it matters is twofold. First, look at these names and you can tell, this is a celebration of Australian cycling. Oz is forever creeping up the ranks of Cycling nations, and the supply of talent is replenishing itself as we speak. For now though, the old guard is still around and worth another go-round. That this go-round includes the unveiling of the World Champion's jersey on home soil should make for quite an exciting moment. One for the fans. [Yes, I know Cadel has worn the kit; he just hasn't raced at home in it, as far as I know. Certainly not the BMC version.]

Secondly, this is the raising of the curtain. I should've asked Hincapie if it hits the riders in general that when the gun goes off in Adelaide, 2010 is really underway. Or if it's just a more formal step in the slow ramping up for April. In any event, there will be some rather significant "firsts": First ever race by Team Sky. First ever race by team The Shack (albeit a familiar lot). First appearances of a lot of kits, and a lot of new names (e.g., Omega Pharma). First race in their new digs for guys like Hincapie, Davis, Karsten Kroon, Daryl Impey, Oscar Pereiro, Jack Bobridge, and many others. Last race for Alejandro Valverde...

So enjoy the pageantry, the sprints, the live pictures (Jan 23 on Versus; stage recaps too), and the feeling that winter is on the way out. My pick to win... Hutarovich!