Share All sharing options for: Smackdown Condolences and Cross Dreams

Some unexpected time on my hands this morning...

First, my condolences to the Fabian Cancellara backers in the Best of the Aughts Smackdown Tournament. It seems as though some people are taking his stunning upset loss to Erik Zabel pretty hard. I do hope we as a community can band together, heal the wounds, and move on. But I know it won't be easy -- it's been an incredible, emotional week for us all. Too bad Mattan Drafts the Cars didn't sweep to victory; I think a lot of us would feel less troubled. 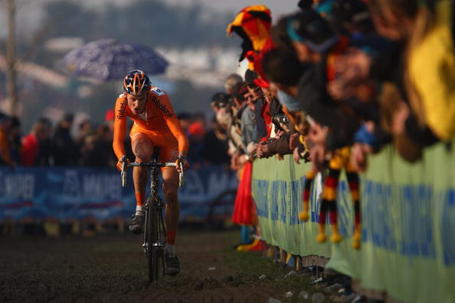 Tomorrow, cyclocross will become about ten times more interesting to me, as Lars Boom takes a whack at his old sport, prepping for the Dutch nationals. If you haven't been following 'Cross too closely this season, here's the story: Niels Albert > Zdenek Stybar > Sven Nys. A week ago Serge Kevin Pauwels won the UCI event in Zolder, making him the first person not named Nys, Stybar or Albert to win on the Belgian or world scene in 19 races.

Boom, meanwhile, hasn't been seen at a 'Cross race this winter, at least not in his kit, prior to now. Another roadie dabbling in 'cross wouldn't be news if Boom weren't a former 'Cross world champion at every level: junior, U23 and Elite. All in a span of five years. But Boom packs plenty of Awesome! in his road performances too, where his prospects are $ignificant, so 'Cross is more of an afterthought for the Large Bomb nowadays. Is the Dutch Nats, in fact, his farewell to 'Cross? Once his road career takes off, he may have some difficulty squeezing in even these two races, though if Boom can translate a few weeks of 'Cross into a good springboard for his winter training, then maybe this is merely a glimpse of his continued future of dabbling in the sport. Maybe our Dutch friends can confirm what this really means, but a Dutch 'Cross god of Boom's stature doesn't come around every day in a sport heavily tilted toward Belgium, so Boom's appearance and farewell would be a bittersweet affair in Holland.