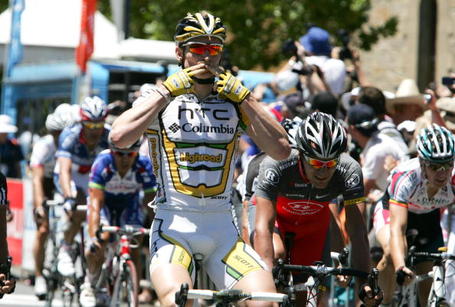 ...Get used to it. Andre Greipel answered the bell again today with another sprint victory in Hahndorf, his sixth victory in seven starts at the TdU, dating back to 2008. There is only one word for such a record: elite. But you won't hear me use it, because it's January, and in most seasons the Champions of January don't hold serve the rest of the year. This is sometimes even true for HTC. Anyway, today's results, all s.t.:

Photo by James Knowler, Getty Images Sport. And yes, this is from yesterday... be patient people!