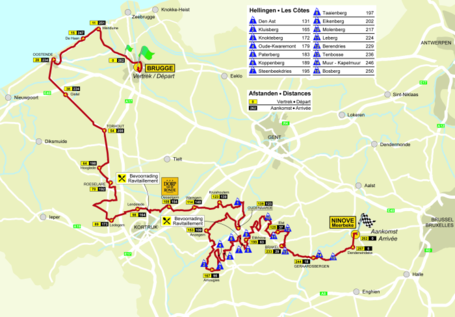 There you go folks. Sunday April 4:th is the day to mark in your calendar and these are the cold hard facts:

What else is there to say? Find out after the flip. (But really. Mark your calendar before you do anything else. I'm not kidding)

The route is pretty much what has been leaked before. The Eikenmolen is out and the race finale is now back to moving direct from the Tenbosse to the Muur in Geraardsbergen. If you heard an anguished cry from deep in the snowy Flemish Ardennes, that was probably Stein Devolder cursing the Cycling Gods for ruining his run of good luck. Others may be more indifferent. The route will be plenty decisive anyway.

Another alteration is the removal of the Molenberg as the first climb. Probably this is a move intended to avoid to massive pile-up caused by the fresh field hitting the narrow climb that starts with a tight 90 degree turn. Minor chaos has always been the result despite it coming early in the race before the real action begins. The Molenberg is still included thankfully, quite possibly coming at a decisive moment in the race just before the Leberg and Berendries climbs.

This year the route also takes the peloton west from the start in Brugge, to the coast via Oostende for some nasty crosswinds no doubt, before turning east towards the familiar Flemish Ardennes area around Oudenaarde. Count on that little detour adding a little extra spice to the early race and also to sap some of the strength of the riders. Don't count on it having a major effect on the race though. Everything before the Oude Kwaremont is generally prologue.

The organizers failed to mention that the Podiumcafe HQ for the race in 2010 will be in (or around) Oudenaarde but I'm assuming there will be some later pressrelease to announce this fact. If not, stay tuned to this channel for more info on this most excellent addition to the festivities.

Did I mention you should mark your calendar? Also book your tickets, sign up for coverage, stock up on Westmalle and generally do whatever you need to do in order to enjoy the best day of the racecalendar the way it's supposed to be enjoyed.

Find all the facts at the official race-site: De Ronde van Vlaanderen