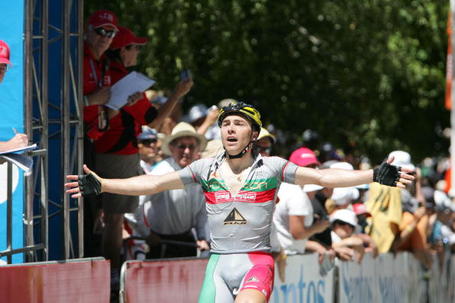 One nice thing about the TdU is that having a Pro Tour event early in the season opens the doors for some riders who might not get a chance to distinguish themselves later on. Enter Manuel Cardoso, and his newly-reformed Footon Servetto squad. Not likely to light up the roads in July, but the TdU gives them a nice platform on which to introduce themselves... even if the Champion of Portugal has temporarily spared the world from the horrors of the tan kits. But... Portuguese champion? As far as I can tell, no Portuguese rider has ever won a Pro Tour event or stage, unless you want to count grand tours, and even there you have to go back to 2006 to find Sergio Paulinho stealing a Vuelta sprint from the bigger names. So, congratulations Cardoso, enjoy this moment in the sun.

Today's TdU stage finale could be great fun. The course is mostly unspectacular, but the final drag is on a slight uphill, and as we saw yesterday guys like Valverde are spoiling for a win. Look for more than just the usual sprinters on hand, though if the grade is slight enough the Greipels and Davises and McEwens will be in the mix too. Should be good fun.