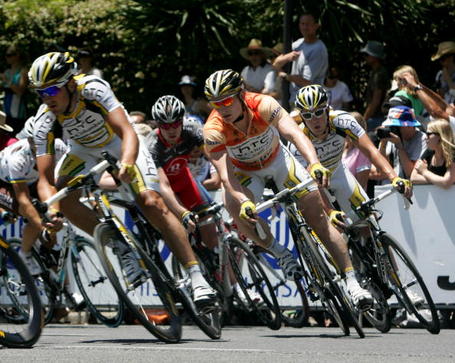 Andre Greipel finised off his overall victory in the Santos Tour Down Under with fifth in today's Adelaide Criterium, which produced a second 1-2 win for Sky 'mates Chris Sutton and Greg Henderson, who went 1-2 (in reverse) a week ago in the other Adelaide criterium. Team Sky made a successful debut, but the story of the week was a spirited defense of his title from two years ago by Greipel. He clearly didn't like crashing out last year in his initial effort to defend his first big GC win, so the HTC sprinter and his mates came out of the gates ready to help him make amends. The win was pure Columbia professionalism, featuring expert leadouts to three stage victories and effective control and chasing when the win was placed into doubt in Stage 5. Oh, and some fine sandbagging by Greipel, who assured the media that he was not a contender for the overall a week ago. Uh huh. Results:

No racing this week of consequence; GP La Marseillaise next weekend.