Much coverage here and here and elsewhere, no doubt. In reality, the bigger story will prove to be the focus on the Vendée Region, an historical cycling hotbed and home to our Bouygues Telecom outfit, where the first three stages of the 2011 Tour will take place. The remainder of the route won't be set for ten months or so, and the French départ probably means there will be a foray or two over some borders later on. But like the recent Brittany start, it's always healthy for the Tour to pick one of its more interesting, cycling-mad home regions for the first-stage spotlight.

Not that anyone wants to discuss the Vendée today. Nope, it's all about the Passage du Gois and the return of the Team Time Trial. Day 1 apparently starts on the island of Noirmoutier, a spit of land off the Vendée coast connected to Fromentine by bridge... and to the village of Bellevue by the infamous Passage du Gois. The Passage is a cobblestone causeway across muddy tidal flats, 4.5km in length, all of which is submerged at high tide. In 1999, the Passage appeared in the middle of a road stage, and while uncovered at low tide, it hadn't really dried out when the peloton arrived, and the resulting crashes ended the Tour hopes for a few riders, including Alex Zulle, who lost six minutes to Lance Armstrong that day. History might have been a tad different had those cobbles dried out better... but that's all speculation.

This time around the Tour will actually start the race on the Passage, following a parade out over the bridge from Fromentine. Presumably this will enable the officials to hold off until the Passage is, um, passable. So in a way it's a cheap trick by the Tour to wave this little bloodsport element at us, knowing that they are guaranteed an uneventful rollout. Unlike this year's cobbles, don't bother wondering if Contador will lose time to any attacks on the Passage. But hey, I'm all for pretty pictures of cyclists zooming past people in clam-digging attire. The map below explains the layout a bit better. 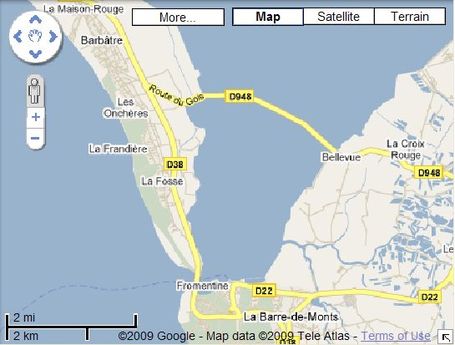 Day 2 marks the return of the TTT, a discipline which will be on the minds of one Alberto Contador when he goes shopping for a new team next winter. Not that anyone wants to talk about the 2011 transfer season today. Even Ursula.