I still prefer a low-key approach to racing for the moment, what with people being in January shape and all, but there's no shortage of excitement happening.

The marquee event would be over in the Czech Republic, hosts to this year's Cyclocross World Championships. Sven Nys hasn't won in a few weeks, but reportedly the course is fast and frozen, to his liking. The hometown favorite would be Zdenek Stybar, and the defending World Champ is of course Niels Albert... both of whom scored wins in the past two weeks in World Cup events. Should be a shootout. More chatter in this thread. As to the Women and U23 races, I'll call on y'all to fill in a real preview. Universal Sports has confirmed their intent to show live coverage at Noon Eastern on Sunday, for the Men's and Women's Elite affairs. The rest will be on demand. Don't believe me? Go here. The race happens live much earlier than that, so start hunting for Czech video streams if you can't wait.

Back on the road, the action will fast and furious (by winter training standards) as the peloton comes home to Europe for the first time in 2010. First up is the Giro della Provincia Regio Calabria/Memorial Fausto Coppi. I spent some time searching for an explanation as to why this is the Memorial Fausto Coppi -- his home in Liguria is light years away from Calabria (down on the toe of the boot), and I am not aware of much connection besides obviously racing there (1949 Giro, for example) on occasion. My best guess is that this is the 50th anniversary of his passing (couple weeks ago), so there will be a lot of Memorial Fausto Coppis around. Also, the name Fausto Coppi is good for business. Not sure the scary race poster is though: 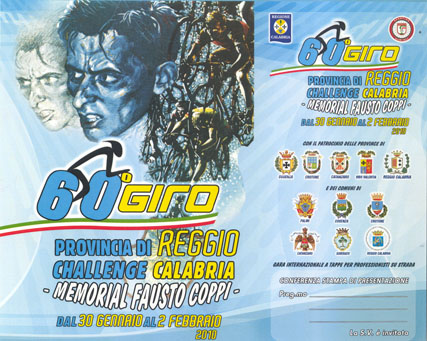 Anyway, the mini-Giro of one of Italy's quiet corners -- way up on my list of places to visit -- covers four stages around the region:

Fortunato Baliani took the honors last year. Among the startlist are a full complement of Liquigassers (though no Shark of the Straits -- Nibali -- just a ferry ride from his home), Lampres (Petacchi, Pietropolli), ISDers (Visconti, Gatto) and some other familiar faces: Luca Paolini, the Chicken, and SELLLAAAA!

In France, it's time for another time-honored tradition: my annual joke about how awful the French national anthem is. Yes, it's the GP d'Ouverture La Marseillaise, the one-day race around the southern port to celebrate a song that, were it not the traditional anthem of a G8 nation, could be confused for the chanting of a blood-thirsty mob. Do you hear in the countryside those ferocious soldiers roaring? They come up to our arms to slit the throats of our sons and wives! Ew. Still, get 80,000 people screaming this in unison at the Stade de France and you can imagine why Les Bleus are impossible to beat in Paris. Aux armes, citoyens! Anyway, I asked DS Little Bear to sketch the route, and here's what he came up with: 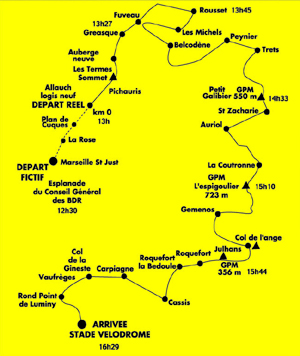 Some nice climby bits in there. Last year Remi Pauriol stole away with Thomas Voeckler and Yuri Trophymom in hot pursuit, a minute up on the climbers' peloton. Pauriol's start is uncertain, leaving Voeckler with the #1 dossard and the favorite's seat. But don't sleep on the Vacansoleil 1-2 of Hoogerland and Brice Feillu. Of course, what really matters is who's on form, but don't ask me. The GP is a one-day teaser for l'Etoile de Besseges, running Wednesday through Sunday -- another Voeckler affaire. More on that next week.