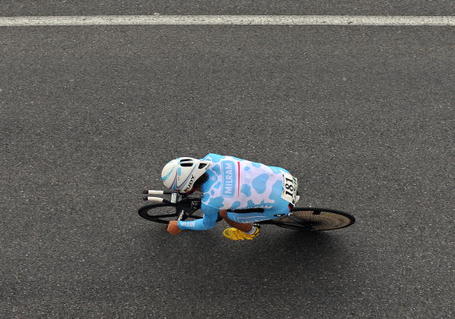 News of the day is the likelihood that Milram will lose its principal sponsor after this year. Link is to Radsport, which has a little more in-depth coverage of the expected end to the Nordmilch dairy dollars; VN has a piece thrown together, but to me it's awfully heavy on the doping stuff. Yes, we're all aware of the media backlash against cycling and doping that's occurred over the last few years, and as a result German fans are at best indifferent to the sport. Or so I gather, though admittedly I don't pay uber-close attention.

However, media and fan attention can be pretty fickle, and as a fan of various sports my hunch is that this problem would go away fast if Germany had any charismatic stars to perk up their interest. When Erik Zabel retired a couple years ago, it brought down the curtain on an era which certainly included big stars (charismatic or not): Zabel won everything short of mountains and time trials; Ullrich won plenty of those, along with an Olympic gold medal; Steffen Wesemann won de Ronde; and the T-Mobile team held the top ranking for a handful of years. Now? Andre Greipel is by far their biggest winner, but he's plan B on an American outfit. Heinrich Haussler might have ignited some interest but for the guy in front of him at a monument or two, though he too rides for a non-German squad. There are some stars in waiting, like Tony Martin -- again, not riding much in Germany.

Much of the blame has to fall on Milram. CQ credits them with a paltry 17 wins in the last two seasons, including few of any great consequence. Why Milram is what it is will be the subject of more in-depth analysis when I get to the team previews (starting in 3... 2...), but suffice to say that this latest "crisis in German cycling" is the failure of Germany's lone Pro Tour team to give German fans a reason to get excited about the sport. In fairness, DS Gerry van Gerwen isn't just casting around for money; he's using the team's situation to re-energize his reasonably talented team. Van Gerwen said he expects his troops to win 25 races -- one tenth of their starts -- in 2010. He also moved the team's training from nice hotels to more rudimentary accommodations, where they have to do their own cooking and cleaning. This has apparently fostered "a new team spirit" or at least a message received. No more futzing around in 2010. Or else.