[Damn, I sure wish Getty Images Sport had one of those pictures of Denis Menchov from November posing next to the map of the 2010 Giro course at the gala in Milan. I would SOOOO love to post that right now.]

Anyway, team rollouts aren't always newsworthy, but if you're looking for Rabo news, CN has Menchov's news from Rotterdam today -- that he's skipping the Giro d'Italia a year after winning the Centennial edition to focus on the Tour de France. Rabo Sport is a font of info today too. Some highlights:

Hm, need some sort of visual. What shall I use? Ah, the assault vehicle, seems a propos. 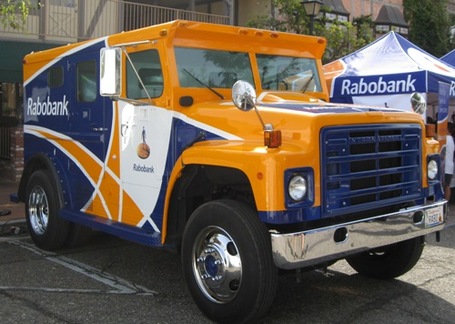