U23 RR: Home Cookin' For Matthews

Share All sharing options for: U23 RR: Home Cookin' For Matthews 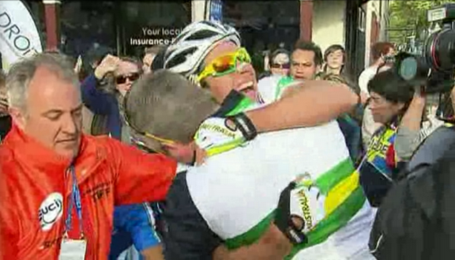 Australian Michael Matthews unleashed a massive sprint in the final 200 meters of today's Under-23 World Championship Road Race to score the host nation's first ever rainbow jersey in the discipline, leaving John Degenkolb, Taylor Phinney and the rest in his wake.

The race was enlivened by a long escape involving two Ben Kings (US and Aus), and the last lap of the race was full of attacks, but the hills of Geelong failed to separate out any of the big favorites. With 1.5km, the last of several Tony Gallopin attacks was reeled in, and a bunch sprint ensued. Lacking much organization on the grueling, uphill drag to the line, Matthews ground his way away from the competition in the last 30 meters, putting a couple bike lengths between him and silver medalist Degenkolb of Germany, who had a wheel on the rest of the bunch. Phinney barely managed the bronze with a bike throw to edge Canada's Guillaume Boivin and France's Arnaud Demare. On further review, the judges awarded Phinney and Canada's Guillaume Boivin a tie for third and gave each the bronze medal! Very unusual. Nice to see someone's taking care of the kids.