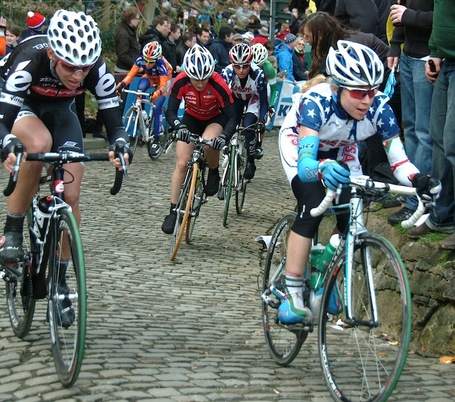 The HTC-Columbia women's team has signed Amber Neben and Amanada Miller for next season. The two riders will give the team a slightly more American flavor as Italian Noemi Cantele departs for Garmin-Cervélo. It's a little surprising that Neben doesn't ride for HTC already. She's a past U.S. National Champion on the road and past World Champion in the time trial. Neben has also twice won the Tour de l'Aude. (No more Tour de l'Aude, boo!) Neben also rode for T-Mobile, when the team served as the U.S. National team.

Press release quote! Neben told the press release, "I am really excited to be joining the team. The roster is loaded with two of the greatest in the history of the sport." Interestingly, Neben did not say which two riders she meant here. I'll go with Yoko Teute and Judith Arndt, but really, I'd love to know for sure. (Maybe I'll ask! Because I can!) Relative to Neben, who has a deep experience at the international level, Miller is just getting started. The young American turned professional in 2010 and celebrated a pair of victories here in the United States.