Interview: Catching Up With Cantele

Share All sharing options for: Interview: Catching Up With Cantele

When we last chatted with Noemi Cantele, she was preparing for the Ronde van Vlaanderen, which she called "the best race of the year." She also hoped to defend her Italian national time trial title and do a good ride at Worlds. Fast forward to now.

Cantele finished her season at HTC-Columbia with several wins in Italy, and a top ten finish at the Ronde. A repeat at nationals eluded her when she finished third in the time trial. Instead, Cantele's best result came late in the season with a podium finish at the Giro delle Toscana stage race. From there, Cantele carried her good form to Geelong, where she contributed to Giorgia Bronzini’s World Championship victory, though the race did not suit her own characteristics. In all, it was a relatively low-key season for the Italian who counts a podium finish at Worlds and several World Cup wins among her career results. With the season at an end, Cantele leaves HTC-Columbia and will race for Garmin-Cervélo next season.

I had the chance to ask Cantele some questions, because that’s what I do. And she answered! She told me about her season highlights, about why the Italian women totally rock worlds, and what she expects to find at Garmin-Cervélo. 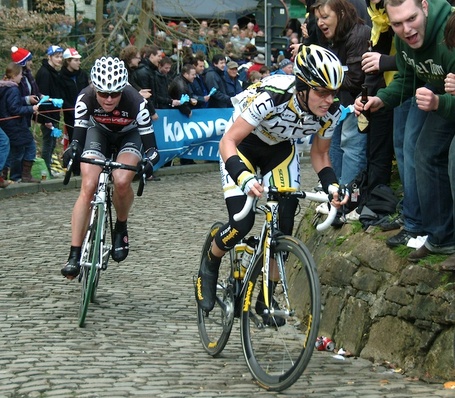 Every rider has a season highlight reel. Cantele called the Ronde van Vlaanderen a highlight, "but I didn’t get a big result!" She finished seventh in the Flemish classic, which Grace Verbeke of Lotto Ladies Team won. Still, with its enthusiastic crowds and big race vibe, the Ronde stands out and Cantele hopes someday to win there. But that is for the future.

This season, Cantele had her best result at the Giro delle Toscana. She took home a stage win, wore the leader's jersey for two days, and finished third overall. Ever wonder what’s it’s like to be off the front, nearly to victory, with the bunch chasing hard? Cantele’s been there. "The final 5 kilometers of the race was like a nightmare, because the bunch was getting super close," Cantele recounted. "But I made it!" Cantele finished third overall at Toscana, thanks to good legs and a strong ride from her HTC-Columbia team in the opening team time trial. She also credited American Evie Stevens for her "great support."

The Giro Donne is one of the big races for the women, especially an Italian like Cantele. Unfortunately, the race proved a low point for the HTC-Columbia rider. "I should have quit the Giro, because I didn’t feel good," she said. Thinking of her later season goals, she tried to keep going, but ended the race tired. "I tried to resist and suffer every day, but maybe thinking in the long-term was not a good idea," she concluded. Cantele finished the race without a stage win and well down in the general classification.

So why do the Italian women ride so well at Worlds? "I think the reason is that we have many good riders that can be there at the end of a hard race like Worlds," Cantele explained. And maybe more importantly, "we are able to be honest with each other." A team that talks together wins together. The Italian team did not necessarily expect a sprint finish for the women’s race, but the race was "not super hard in the beginning." Giorgia Bronzini was "the last option." Though the Italian women looked strong in the finale with attacks from both Tatiana Guderzo and Cantele, to some degree, their tactics resulted from weakness. "We didn’t have a team strong enough to do a hard race from the beginning," Cantele admitted. 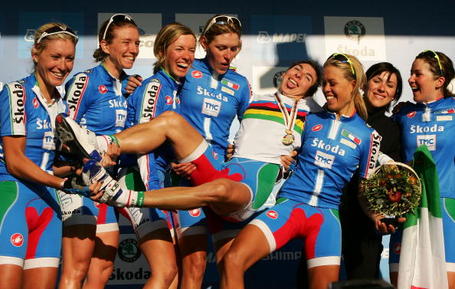 The Italians waited for the other teams to make the race, but the race-making never really happened. Unlike Mendrisio, the United States team wanted a sprint, so they did not attack the race hard from the start. Likewise for the German team, who typically ride an aggressive race. In Geelong, the Germans waited until late in the game, when it was clear Teutenberg’s chances were gone. In Cantele’s retelling, the tactical decisions did considerably more to shape the race’s outcome than it seemed at first glance. A sprint was never inevitable, though the slow tempo in the opening four laps made it increasingly likely. Said Cantele: "I think if the race was hard from the beginning like in Mendrisio and Varese, the finish would have been totally different."

And the finish very nearly was different, as Nicole Cooke and Judith Arndt made a late attack that nearly survived to the finish. "It was a really breathless finish," said Cantele. Bronzini was actually behind the Vos group when Cooke attacked. Now we know why the Italians did not contribute to chasing back Cooke and Arndt. "I was with Bronzini to try to close the gap to Vos’s group," explained Cantele. She knew Cooke and Arndt had gone up the road, but she was not convinced they would stay away. "After the feed zone and the false flat, the group was always faster than any breakaway. For Arndt and Cooke, it was too difficult to keep a big gap," said Cantele of the dash to the finish. Cantele brought Bronzini up to the Vos group, and from there, the talented sprinter played her game, coming around Vos at the 50 meter mark. The best part of the day was the celebration, "to celebrate Bronzini’s victory under the podium all together, singing the l’Inno," said Cantele.

Cantele is leaving HTC-Columbia after this season, because the team did not renew her contract. Instead, HTC has added former U.S. National Champion Amber Neben, a logical signing for the California-based squad. No worries for Cantele, the Italian will race for Garmin-Cervélo next year. That’s Emma Pooley, Claudia Häusler, and Noemi Cantele, and they’re all on the same team. Garmin-Cervélo looks well-prepared for just about every race on the women’s calendar. Cantele has not yet set any specific goals for her new adventure, though the Italian remains ambitious. She said she is looking forward to meeting her new team-mates. Then, she wants to "go to the races and have fun... and for sure to win!"